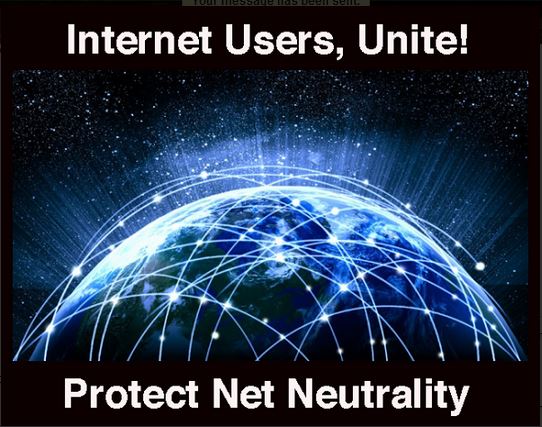 #SavetheNet!
Here are four reasons you should do what you can in defense of the open internet:
• So you won’t have to pay higher fees to access what you want on the Net;
• So small startups and alternative news sites can’t be stifled by the giants;
• Because this change will allow ISPs to deny service altogether to less lucrative areas; and
• Because net neutrality protects free speech.

On December 14, the FCC will vote to end net neutrality—unless we stop them.

This is an all-hands-on-deck moment to save the Internet. We have little time left. So what can you do now? Here are three actions proposed by Popular Resistance (Share this list!):

1. Visit BattleForTheNet.com to be connected to your member of Congress. Congress has the power to stop the vote and we have the power to pressure Congress!

2. On December 7, link up with or organize your own Verizon Protest at a Verizon store. Make sure people in your community know and recognize that FCC Chairman Pai is a former Verizon lawyer working to hand over our open internet to his Telecom buddies. While you’re there, connect with your members of Congress. Several events are also planning marches to and meetings with Congressional members. Visit VerizonProtests.com for more info and to find or start a protest near you. So far there are two Verizon protests close to OVEC’s headquarters, one in  Huntington at 10:00 a.m. and one in St. Albans at 11:00 a.m.

3. #StoptheVote Overnight Vigil: On December 13, come to Washington DC! Starting in the afternoon, Popular Resistance leaflet employees as they leave FCC, urging them to stand up for Net Neutrality. They’ll do visibility actions including holding signs and props and doing light projections. In the evening, they’ll start an overnight vigil, holding space outside the FCC and continuing the messaging to protect the net! They’ll also do trainings for the morning action at the FCC. Finally, on the morning of the December 14, they’ll engage in peaceful actions at the FCC.

Get more information and sign up via this link.

Background
Just in case you don’t already know what all the fuss is about on “net neutrality”—that term means that internet service providers (ISPs) have to treat all content the same; no creating fast lanes for traffic coming from sites they’re affiliated with, or which have paid-for faster access, and no slowing down or blocking content they don’t like.

Some of these companies, while lobbying hard for the removal of Title II protection, are swearing that they would never, never do any such thing. There was a big kerfuffle about this a couple of years ago, when ISPs tried to knock down the long-standing principle of net neutrality, and it was decided that it could legally be defended only by putting the Internet under Title II (essentially saying the Intent is a public utility). After a huge outcry, with the Federal Communications Commission (FCC) getting a record number of comments—over a million, with the vast majority supporting net neutrality—this was done and our internet access has been safe.

That is, until Trump appointed Ajit Pai, a lawyer for Verizon, to head the FCC. Now Pai has announced a new law that would remove the internet from Title II, in order to avoid “heavy-handed government regulation.” It will be voted on at a FCC meeting on December 14, and the three Republicans commissioners are expected to push the change through, over the protests of the other two Commissioners.

Even more people commented this time around, but the waters have been muddied by a large number of identical, suspicious pro-repeal comments, many in the names of people who exist but deny sending them. Pai’s FCC has refused to cooperate with New York’s Attorney General who is trying to investigate the phony comments that came from New York.

So much is at stake! Do what you can to #SavetheNet
Here is a piece talking about how the loss of net neutrality would silence black voices; it also mentions Native Americans and other people of color, Muslims and immigrants, but this applies also to gays and other minorities including environmental activists—even the Right is opposing this.

Here is one that looks at it from the point of view of workers. 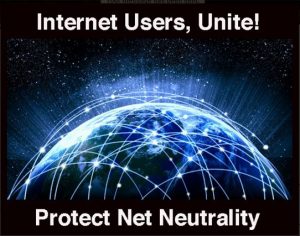