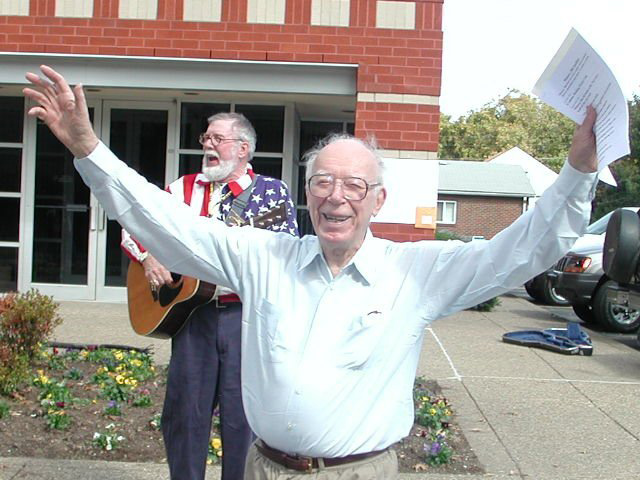 Ken Hechler, front, at a rally to end mountaintop removal outside the headquarters of Massey Energy. Photo by Vivian Stockman.

West Virginia and the nation lost a true hero and people’s champion.  Former Congressman Ken Hechler, died at his home in Slanesville, WV, on December 10, 2016. He was 102 years old.

There are politicians, public servants and then there was Ken Hechler, a man in a class all of his own— military man, historian, educator, politician, activist and, my personal favorite, “hell raiser.”  Those who know him are familiar with his uncompromising commitment to justice and the betterment of all people in West Virginia, but especially for his advocacy of the health and safety of our nation’s coal miners. OVEC members may know him best for his passion for democracy and our iconic mountains. As a lifetime member of OVEC, Ken was often a speaker at rallies to end mountaintop removal where he sang  “Almost Level, West Virginia” his parody of the popular John Denver song, “Almost Heaven, West Virginia.”

I came to know Ken in the late 80s during my first-ever plunge into environmental issues as a member of the Huntington Tri-State Audubon Society—working to “save” the Green Bottom wetlands, the third largest wetlands in West Virginia near Huntington, where the pre-Civil War home of General Albert Gallatin Jenkins still stands.  Ken, as a Jenkin’s historian and then Secretary of State of West Virginia, was familiar with Jenkin’s history and so joined with our coalition urging the state and federal government to consider managiing the former plantation home, its wetlands and its significant Native American archaeology for a higher use beyond simply a hunting ground.  Not surprisingly, the media portrayed the issue as hunting vs non-hunting (though some folks were very concerned about birds of prey which frequented the area like Bald Eagles as well as the historic Jenkin’s home).

After several years of butting heads with both state and federal agencies, the U.S. Army Corps of Engineers agreed to hold a public hearing where Ken and others faced off.   Despite a room full of several hundred angry, shouting hunters, Ken stood his ground and voiced his concerns.  In the end, a reasonable compromise was reached where the wetlands were expanded, the Jenkin’s home underwent renovations (and was managed for a brief time by WV Division of Culture and History), signs were posted to alert hunters to the presence of protected birds of prey and native species were planted to provide wildlife habitat. Undoubtedly, Ken’s involvement garnered greater media attention and raised public awareness to the issue, than we otherwise would have had, a valuable contribution.  Presently, Green Bottom Wildlife Management Area has become a well-known location for bird watching and hunting, although the Jenkin’s home, despite the millions spent on its overhaul, is boarded up and no longer open to the public.  Nevertheless, every time I visit Green Bottom, though, I am thankful that Ken lent his time, energy and “notoriety” to this unique site.

When the issue of mountaintop removal reared its ugly head, Dr. Hechler eagerly joined with community members and environmental activists hoping to end the destructive mining technique.  He was a member of Congress during the catastrophic failure of the Buffalo Creek sludge-dam in 1972 that killed 125 West Virginians, a tragedy which eventually led to the passage of the Surface Mine Control and Reclamation Act in 1977 (SMCRA).  This bill, however, continues to be a failed attempt by the state and federal government to regulate surface mining by the coal industry.   Ken was greatly concerned when the final version of the bill legitimized mountaintop removal (MTR) which was supposed to be an exception rather than the rule when it came to strip-mining; MTR was only to be used when a flattened mountain provided land for authentic economic development.  While coal companies by law are supposed to return the former mountains to “approximate original contour”, unfortunately, states regularly issue permits with variances to that provision.  As it turns out, Ken foresaw the destruction that would follow the passage of SMCRA—hundreds of thousands of acres of denuded, flattened mountains along with more than 2,000 miles of annihilated streams and disappeared communities. A favorite phase of Ken’s:  “Akin to putting lipstick on a corpse,” was how he referred to strip-mine reclamation.

A notable event in Ken’s effort to stop MTR, was his participation in 1999, while WV Secretary of State, in a re-enactment of the historic Miners’ March on Blair Mountain that preceded the 1921 Mine Wars.  In 1997, the WV Division of Environmental Protection had issued what would have been the largest ever mountaintop removal permit in the state.  At risk were not only the mountains and the small community of Blair, WV, but also one of the most historic labor/history sites in the nation, where about 7,000 miners determined to organize a union were met with great resistance and after five days, halted by 3,000 armed “militiamen” organized by Logan County Sheriff Don Chaffin.  This was the largest battle on U.S. soil since the Civil War where eventually the U.S. Army and U.S. Army Air Corps were called in.

A courageous Dr. Hechler, 84 at the time, joined the reenactment with a number of others (OVEC’s Laura Forman, Carol Jackson, CRMW’s Judy Bonds, Larry Gibson, Jimmy Weekly, and Cindy Rank to name a few) supported by several organizations including OVEC.  For many people, the application and issuance of a mountaintop removal permit at historic Blair Mountain, which could literally erase the dark history of mining, underscored the sheer arrogance of coal companies as well as the complicity of government agencies.   While the reenactors were not met with guns and soldiers, they were, however, harassed every day by miners and others who pelted them with eggs, and much to everyone’s horror, who shoved and kicked Ken.

From a story about the confrontation during the re-enactment by reporter Rick Steelhammer, Ken stated: “I tried to think about Gandhi and Martin Luther King and how they would react. It’s important to retain your cool, but it’s difficult when people begin to wade in and rip up all your signs, throw eggs at the back of your head, grab away your West Virginia flag, and trip and kick you.”

That incident led to warrants and arrests of those who committed violence and eventually landed some people in court, though not in jail.  One of the Logan County perpetrators of the harassment eventually ended up serving in Governor Bob Wise’s administration.  I still smile when I think about Ken holding a sign at a protest that said:  “Kick me and get a job with Bob Wise.”  And recently, the DC District court upheld the U.S. EPA’s decision to rescind the permit for mountaintop removal on Blair Mountain, another people’s victory in which Ken participated in a major way.

Ken Hechler’s legacy though far-reaching (and incalculable) was also at times was very personal.  In particular, his influence on Larry Gibson, another Mountain Hero, was very special.  Ken often traveled with Larry to colleges and universities throughout the country to talk about the impacts of mountaintop removal on land and people of Central Appalachia.  Because of Ken’s encouragement, Larry went back to school to improve his reading and writing skills.  Having become quite a duo, both Ken and Larry were interviewed by 60 Minute’s Mike Wallace, who came to West Virginia to produce a segment on mountaintop removal.

Through nearly two decades, Dr. Hechler, admired by so many, continued to answer the call, showing up at events, protests and rallies—the most notable one, a rally and protest at the Marsh Fork Elementary School, in Raleigh County, where he, along with actress Daryl Hannah and NASA climate scientist, James Hansen, were arrested in a non-violent, direct action to draw attention to the great need for a new elementary school.  A massive and dangerous coal waste impoundment loomed above Marsh Fork Elementary School adjacent to a coal silo, a coal processing facility and a mountaintop removal site.  Coal River Mountain Watch’s Ed Wiley began urging state officials to build a new elementary school after he picked up his ill grand-daughter who told him, “Granddaddy, this school is making us kids sick.”  After 6 years of tenacious organizing and advocacy, a new school was opened where Ken Hechler had,  once again, stood shoulder-to-shoulder with those most impacted.

As someone who was deeply concerned about the state of our country’s democracy, Ken became active in campaign finance reform issues, especially when “Granny D”’s (Doris Haddock) began her epic 3,200 mile journey/walk from California to Washington, D.C. to elevate the need for supporting the federal McCain-Feingold bill.  If passed, this legislation would help reduce spending on political campaigns.  Ken walked more than 500 miles with Doris who turned 90 years old by the time she arrived in the nation’s Capital.  When Doris arrived in Marietta, OH, Ken Hechler was on hand to greet and welcome her as she made her way across the Ohio River to Parkersburg, WV, to speak to supporters.

In 2006, Granny D and Ken spoke at a regional mountaintop removal summit dubbed “Healing Mountains,” that OVEC and Heartwood (a regional organization that works to protect public lands from abusive practices) organized.  Doris and Ken reminded us that if we want to win our issues, we needed to be more inclusive and supportive of people of color.  You may recall that Ken was the only member of Congress that participated with Dr. Martin Luther King, Jr. in the Civil Rights march in Selma. Union supporter, environmentalist, statesman, writer, historian, teacher, husband, father and add one more label—civil rights activist.

If you still need convincing about what an amazing man that Ken was, he had the most incredible memory of anyone I’ve ever met.  My hunch is that Ken spent his remarkable life making really good memories.

Dear Ken, we know that you, of all people, have earned your eternal rest. Well done. You will be sorely missed.

Ken Hechler: A Hero for Our Time 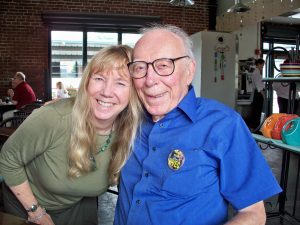