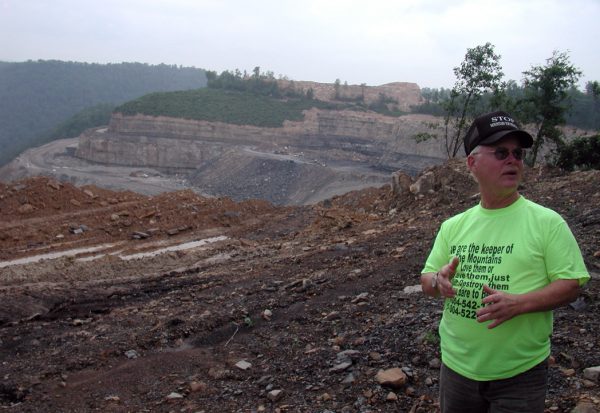 Over the years, I have interviewed many interesting people, people who taught me a lot. One of them is Larry Gibson, otherwise known as the Keeper of the Mountain.

Larry told me he first became an activist after returning to the family’s land in the mid 1980s. He noticed the destruction of ecosystems and communities brought about through the practice of mountaintop removal coal mining.

I spoke to Larry via phone to get directions to Kayford Mountain, the location of his summer home and the family cemetery. Kayford Mountain is near the town of Sylvester, West Virginia, off Interstate 77 south of Charleston. It is surrounded by mountaintop removal coal mining operations, so getting there can be rather intimidating. 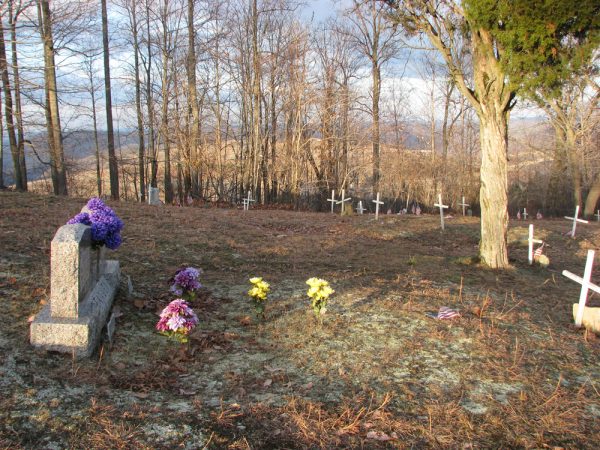 The family cemetery on Kayford Mountain. Photo by Vivian Stockman. 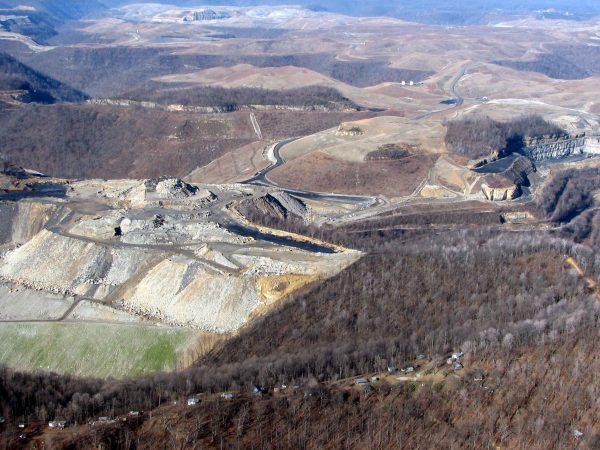 The best phrase I have heard to describe mountaintop removal is “strip mining on steroids.” The easiest way to explain the process to someone is by using a layer cake. Imagine the icing between the layers as coal seams. The cake is the “overburden” that has to be removed to get to the valuable icing. 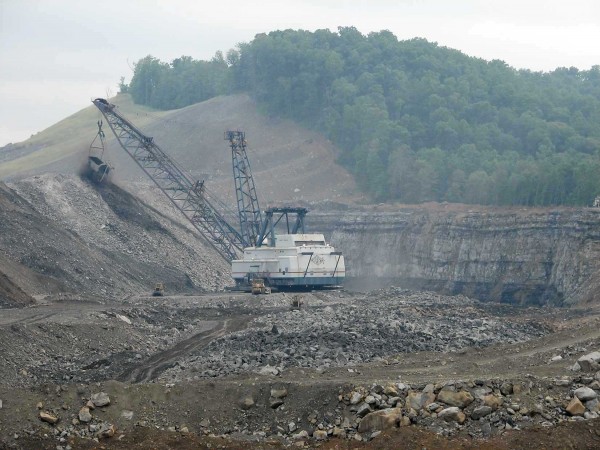 The layers of “icing” and the “cake” can be seen in this shot of a dragline in operation at another mountaintop removal site (the Hobet complex on Mud River). To the coal industry, our amazing forests are also “overburden.” Photo by Vivian Stockman.

After the forested areas are clear-cut and the trees are pushed into valleys and ravines, millions of pounds of dynamite are used to blow off the layers of “cake”—coal companies may explode away up to 600-800 feet of the original elevation. Draglines, scooping machines 22 stories high, remove the rubble between layers of “icing.” Massive amounts of rubble—the former mountaintops—are dumped deposited into the nearby valleys forming what are called “valley fills.” 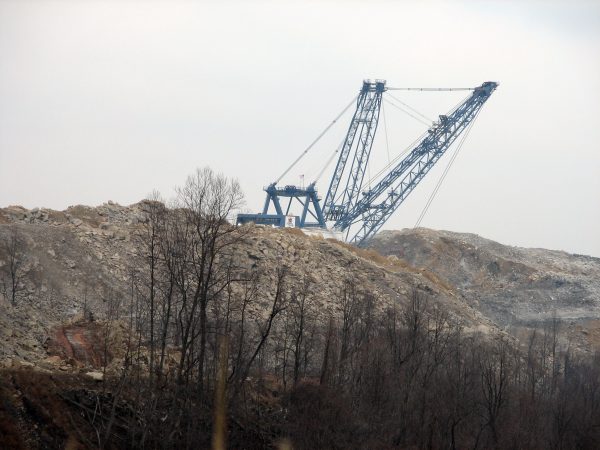 The dragline on Kayford Mountain. Photo by Vivian Stockman. 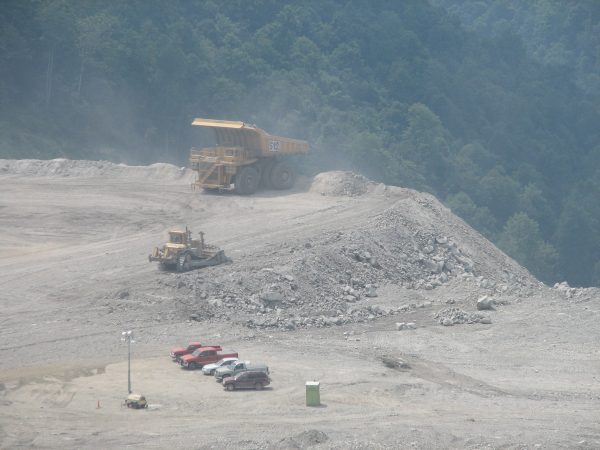 A huge dump truck about dump its load of former mountain into a valley. Photo by Vivian Stockman. 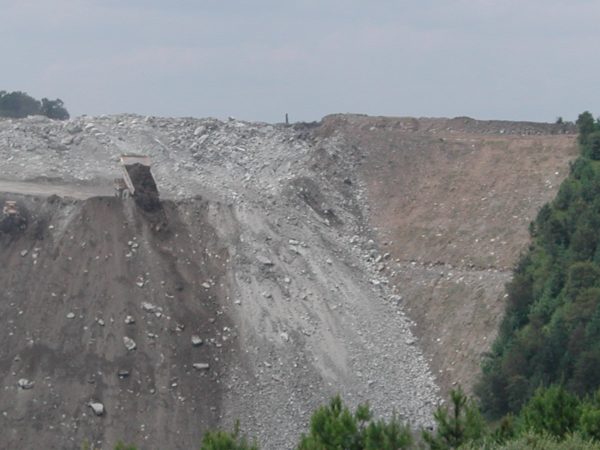 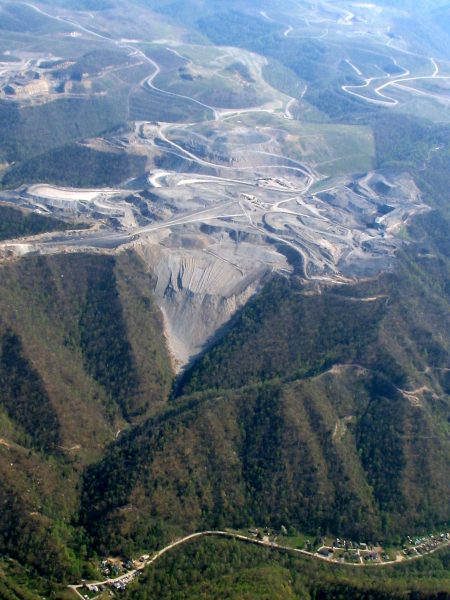 Additionally, the coal must be washed with a blend of chemicals and water to remove impurities before being transported to power plants. The residue from this washing process, a black, toxic slurry, of heavy metals and coal dust is then stored in open impoundments. These lakes of slurry have been known to fail, as was the case in 1972 when a coal slurry impoundment dam broke killing 125 people near Buffalo Creek in Logan County, WV. 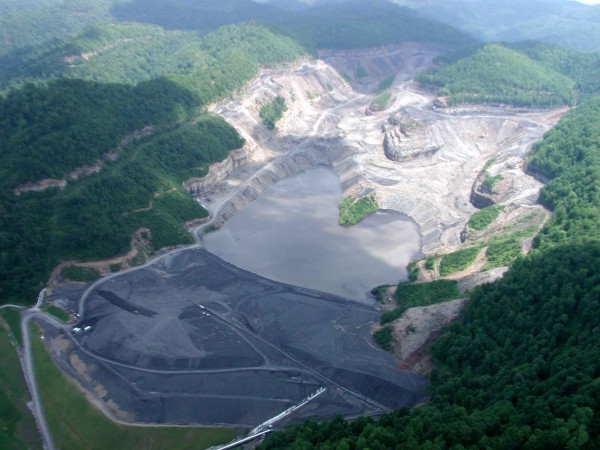 The Brushy Fork coal slurry impoundment, which, at its final stage, will hold 8 billion gallons of coal waste sludge. The impoundment partially lies over old underground mines and is directly upstream from the town of Whitesville, WV. Photo by Vivian Stockman; flyover courtesy SouthWings.org.

I decided to go and see Kayford Mountain for myself and so with directions in hand (no cell phone in those days) I took off down Interstate 77. As I got closer to my destination I noticed what I thought were low hanging rain clouds on the horizon and I could feel grit in my teeth. On further investigation, I realized these were clouds of dust from explosions occurring just beyond the view of the interstate. 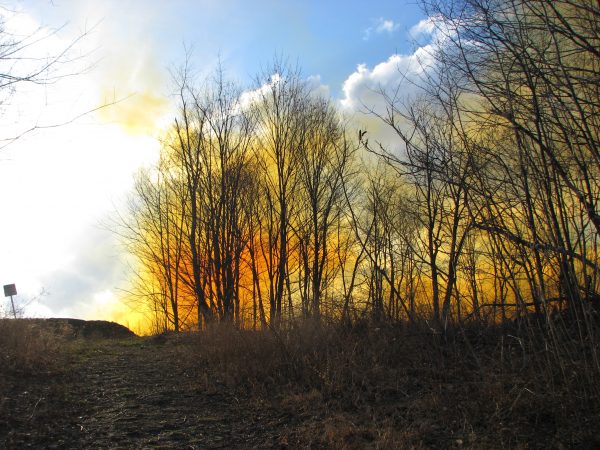 Yellow smoke from a blast on Kayford Mountain. Photo by Vivian Stockman. 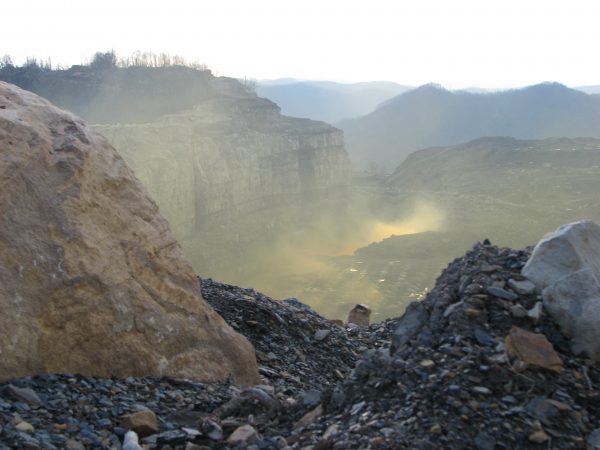 The aftermath of a blast on Kayford Mountain. Photo by Vivian Stockman.

I took the appropriate exit and drove along the two lane road. Immediately I noticed a convoy of coal trucks. More than thirty trucks passed me in less than five minutes. I also noticed that homes were built just a few feet off these roads. With little to no right of way, these trucks could be in your front yard or through your house along with their twenty plus tons of coal.

I passed several small churches and finally came to what I thought was a dead end. It was a valley fill. I pulled over to the side of the road and exited my car to peer up at what appeared to be the tallest grass covered skyscraper I had ever seen. It was literally a vertical structure made of compacted dirt and rock with a splash of grass for aesthetics.

Making my way along this behemoth valley fill, I eventually reached Larry Gibson and his beloved Kayford Mountain. There he stood, wearing his famous shirt declaring “Love them or leave them, just don’t destroy them.” Larry was just a few inches taller than me, but make no mistake his physical statue had no bearing on the force within this man.

Like many anti-mountaintop removal mining activists, Larry didn’t hate coal miners. He had deep ties to the coal industry and many members of his family had been miners. But, Larry pointed out this type of mining relies heavily on machines and dynamite and has displaced thousands of miners. It’s not like your grandfather’s style of mining.

I followed Larry to the edge of his mountain. He owned about 50 acres of heaven in the middle of hell. I looked over the edge and well just gasped at the sight. Several hundred feet below me, I could see a moonscape-like terrain where lush green forests once thrived. There was no topsoil, no trees, no seeds, no creeks, no streams, no ponds, no animals, no ginseng, no anything. 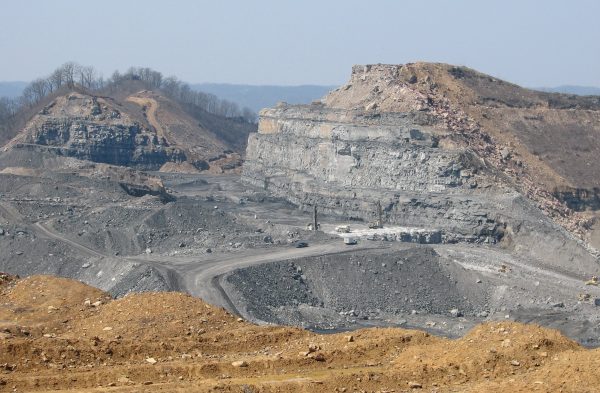 Kayford Mountain no more: An early-spring view from the edge of Larry’s property. Photo by Vivian Stockman. 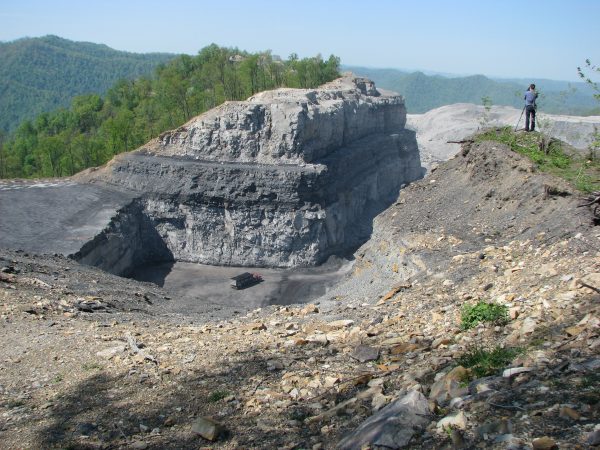 Larry told me about the reclamation process. They hydro-seed a non-native grass, plant a few white pines and declare the land is better than before, because it is flat now. I have heard people in the region say “this is like putting lipstick on a corpse, it looks okay, but it is still dead.” 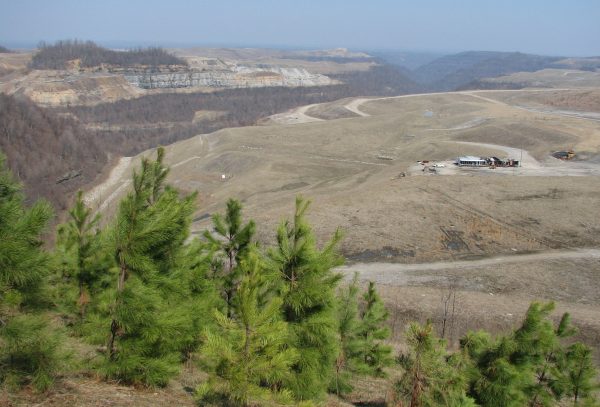 That grey-green forest-less land is “reclaimed.” Photo by Vivian Stockman. 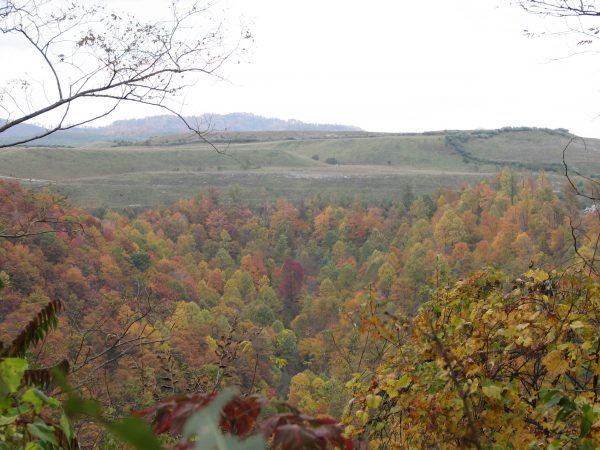 Like many activists in the region, Larry had been harassed, arrested, had his house spray painted, his dogs killed, and his cabin shot at. He had been offered millions of dollars to give up his mountain and leave. Instead, Larry stayed and fought and took people on tours of the devastation. He won many awards for his persistence and dedication to the mountains, including the CNN Heroes Award. 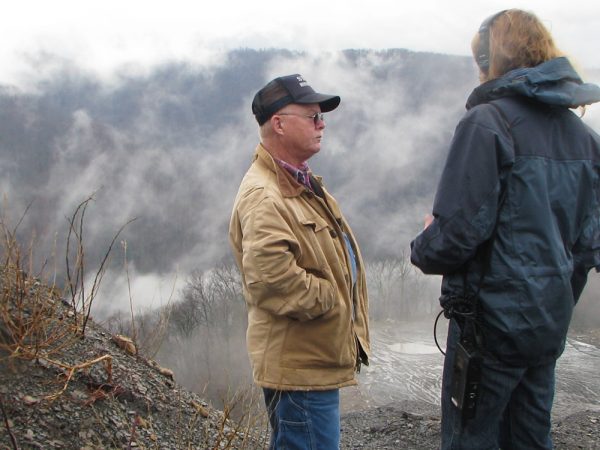 Larry and a reporter on the mountain. Photo by Vivian Stockman. 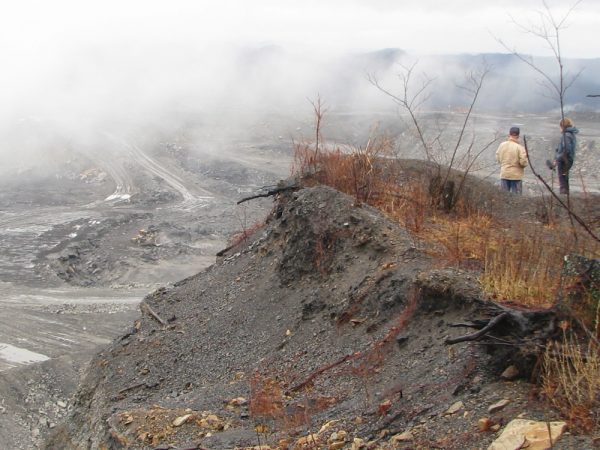 Larry and a reporter and the destruction that is mountaintop removal coal mining. Photo by Vivian Stockman.

Sadly, Larry passed away in September of 2012, but his activism lives on. He has educated millions of people both nationally and internationally on this issue. They now take up his cause.

While we cannot all be heroes like Larry, we can conserve electricity. Every time you turn off that light or crank down that thermostat, you help keep a mountain in tact a little while longer and honor the memory of Larry Gibson, the Keeper of the Mountain. 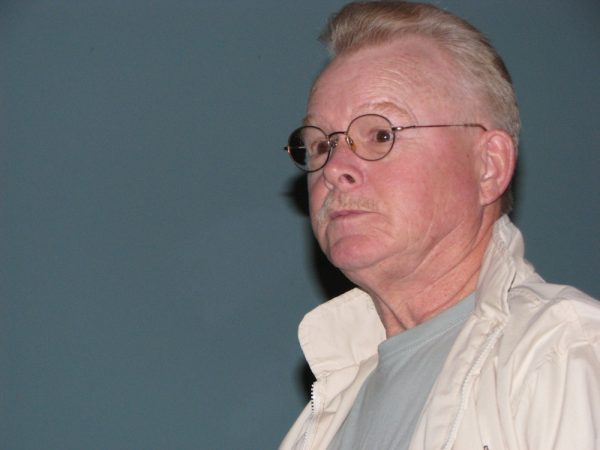 Larry. Photo by VS.

Dr. Randi Pokladnik is a long-time OVEC member. She’s from eastern Ohio and has lived for 61 years in the strip-mined coal counties of Jefferson and Harrison. Unfortunately, deep shale gas fracking activities have become the latest way to destroy these beautiful areas. She carried out her doctorate research in West Virginia, Ohio and Kentucky on ginseng, generating articles such as Can Woods Cultivated Ginseng Programs Help Preserve Mesophytic Forests and Provide Economic Development for Rural Communities?

Larry Gibson was an OVEC board member for 11 years (we now have three-year term limits for board members). In its early days, OVEC supported Larry’s Keeper of the Mountains Foundation, helping to raise funds for his outreach and, eventually, staff.

RAMPS, Radical Action for Mountains’ and People’s Survival, is holding its annual Fall Summit on Kayford Mountain from October 14-16. 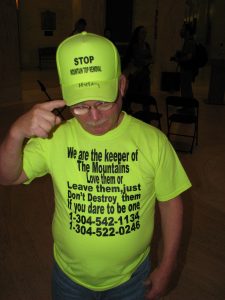