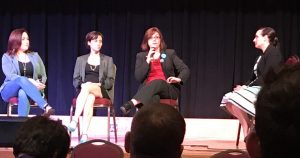 On stage at the LaBelle for the Q & A session, left to right: Amy Vilela, Rachel Lears, Paula Swearengin and Zana Day.

Thanks to everyone who came out to our special community screening of Knock Down the House with Paula Swearengin, Amy Vilela— both of whom are in the film—and director Rachel Lears. Zana Day, with Brand New Congress moderated our post film Q & A session. Thanks so much to these wonderful women for such an inspiring evening!

A Charleston Gazette-Mail reporter spoke with the women before event; read his front-page May 20 story here.

If you missed our community screening, host one of your own! There’s a screening host toolkit that includes information on how to access the film and an excellent discussion guide.

The guide offers suggestions on how to involve and engage people from across political divides.

Rachel Lears says, “For over a decade I’ve investigated the way power and social change work. Too often, communities operate separately in silos and their struggles end up pitted against one another in media narratives. We won’t have systemic change until we overcome this. At this critical and volatile moment, Knock Down the House presents a story of people working tirelessly to unite the struggles of all Americans.”

The screening guide notes, “People at your screening event will likely arrive with varying feelings about the issues that are raised in the film. You can keep your conversation moving forward by focusing, as the film does, on the motivations of the individuals in the film and on the themes of representation, money, and political structures in elections. All of these issues are currently being questioned and explored across party lines.”

And that’s one reason OVEC hosted the May 19 community screening at the LaBelle Theatre in South Charleston.

Underlying virtually every issue we work on is the issue of the health of democracy itself. Fair courts and legislators accountable to people, not corporations, are essential to a healthy democracy.

This film shows us that ordinary people can challenge big-money politicians. We see a solution to corrupt politics as usual: empower small donors, ensure equal access to the ballot box, and give everyday people a greater voice in the political process through reforms like those in West Virginia Citizens for Clean Elections’ Pro-Democracy, Anti-Corruption platform. OVEC is a co-founder of this broad coalition of groups (some of which do not agree with OVEC stances on certain issues), along with WV Citizens for Clean Elections.

If you do host a screening, we hope you will encourage people to get involved with WVCCE and learn about the Pro-Democracy, Anti-Corruption platform–or invite us to your event to talk about it!

As the KDTH discussion guide notes:

Campaign finance laws currently allow for unlimited funding for political campaigns through anonymous channels. Known as “dark money,” those donations may come from wealthy individuals, private interest groups or others. Dark money spending increased tenfold from 2012 to 2016, when more than $300 million was spent in the presidential elections. There is a strong perception that candidates who are elected with dark money are more likely to represent the interests of their large donors than the everyday people in their constituencies.

As a result, many who ran in 2018 announced they would reject corporate Political Action Committee (PAC) funding. Though corporate PACs are different than dark money, candidates who reject the corporate PACs want to bring attention to the influence of big money in politics and emphasize the importance of bringing in small donations from many individuals. Turning down money from corporate PACs became a shorthand way of saying that a candidate rejects the influence of big money, and is committed to the individuals and communities they represent.

Kudos to all the 2018 candidates who did this! The film may inspire you to run for office, or help a candidate run for office. Here’s to making Congress more truly representative of we, the people!

Knock Down the House is now streaming on Netflix. 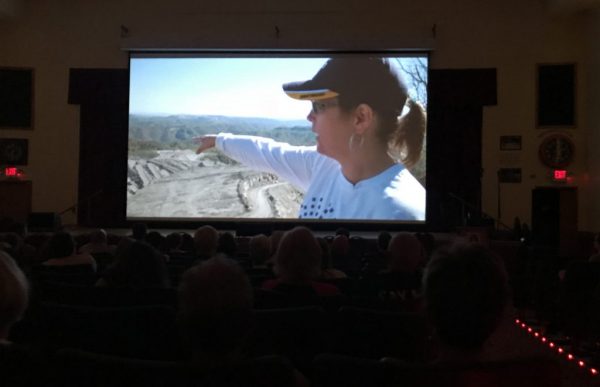 Paula on the big screen!

OVEC is a 501-c-3 organization, and that means we can’t and don’t support or oppose political candidates. But we can and do work on a variety of issues, thanks to the work of volunteers like long-time OVEC member Paula Swearengin, one of four women featured in the Knock Down the House. 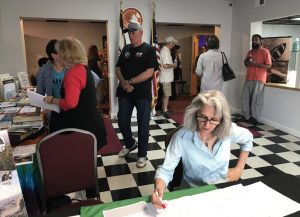