The Paris Accord’s target of keeping the maximum global temperature rise this century at two degrees Celsius above pre-industrial levels seems an almost impossible goal given the lack of courage of leaders to really address the crisis.

The USA is poised to withdraw from the Paris Climate Accord by the end of the year while we learn the Russian Arctic reached 100.4 F, the highest temperature since record-keeping began in 1885. This region, according to NOAA “is seeing atmospheric warming since the mid “1990s at more than twice the magnitude of global mean temperatures.”

On August 14, the current administration reversed a rule on methane emissions set in place by President Obama. The new EPA rule, as reported in the New York Times “is needed to free oil and gas industry from what they call crippling regulations.” The new rule “eliminates federal requirements that oil and gas companies must install technology to detect and fix methane leaks from wells, pipelines and storage sites.”

For many years, both sides of the political aisles have been telling us that natural gas is a “bridge fuel.” They note the lower amount of carbon dioxide emissions from combustion of gas over coal and diesel. Recently, Ohio State University set in motion a plan to construct a fracked-gas powered plant exclusively for the Ohio State campus in Columbus. I was present at a recent virtual hearing conducted by the Ohio Power Siting Board. Those who testified against the plant outnumbered those who were pro construction. The most mentioned downside was the additional amount of air pollution for city residents who would not benefit from this plant while proponents claimed it would create jobs.

On August 26, the local Ohio Valley news reported that a proposed fracked-gas powered plant for Brooke County, West Virginia may not happen as the state’s “Economic Development Authority has not agreed to assume the debt for a $5.6 million private loan for the project should its developers be unable to repay it.” Supporters believe the decision was swayed by those backing coal interests in the state.

Continued investment in coal and fracked-gas means decades of more carbon dioxide emissions. Scientists point out in a 2019 National Geographic article; we need to be retiring coal and gas-powered plants rather than building new ones if we are to come close to reaching our goals. Any carbon-based fuel source, whether it is coal, oil or gas, emits carbon dioxide when burned. Carbon dioxide can persist in our atmosphere for thousands of years. One must also consider all the emissions including carbon dioxide during the full cycle of gas extraction which encompasses infrastructure construction, transportation of frack water, frack wastes and equipment, and energy to produce concrete and chemicals used.

Any advantage natural gas has over coal as far as lower carbon dioxide emissions when combusted is negated when we look at the amounts of methane spewing from natural gas operations every day. In the first twenty years after its release, methane is more potent than carbon dioxide. While carbon dioxide can last in the atmosphere for 300 to 1000 years, the effects from methane are just as urgent to address as climate scientists say we only have a decade to lessen emissions causing the climate crisis.

The atmospheric concentrations of methane increased by over 150 percent since the industrial revolution. Jessika Trancik, an energy expert at MIT, says that in order to keep from soaring above the two-degree Celsius goal, we must keep any extra methane from leaking into the atmosphere. Lena Hoglund-Isakssona, a greenhouse gas expert at Austria’s International Institute for Applied Systems Analysis says, “it’s impossible to hit climate targets with methane in the mix.” She also said a strong increase in global methane emissions after 2010 are “explained by increased methane emissions from shale gas production in North America.”

In February of 2018, in Belmont County, a blowout of a natural gas well run by an Exxon Mobil subsidiary, XTO, released “more methane than the entire oil and gas industries of many nations release in a year.” This leak was observed by the new satellite, Tropomi, a troposphere monitoring instrument which can measure methane. The leak took twenty days to plug and released about 132 tons of methane per hour according to reports from scientists.

Increases in global temperatures, especially in the polar regions, is melting not only ice but frozen biomass that has held organic matter and methane hydrates for millions of years. Human-caused temperature increases are setting a positive feedback loop in motion and once this happens, there may be no reversing some catastrophic events. According to a 2018 study published in Environmental Science and Technology, as the permafrost thaws methyl mercury, a deadly compound, is released. Additionally, NOAA reported these same soils contain “upwards of 1600 billion metric tons of organic carbon, twice as much as is currently contained in the atmosphere.”

Claiming that we need natural gas to bridge to the next energy source is a false statement. We have those “other” energy sources and can invest in energy efficiency. We just lack the political will to move away from an industry that has controlled our nation and the world with a narrative that is not only dangerous but lacks scientific facts. The global scientific community is sounding the alarm, whether we listen or not is up to us, but our grandchildren will not view us favorably if we continue to ignore this crisis.

We are not ignoring this crisis Get involved with OVEC’s work! To volunteer, contact us at info@ohvec.org. 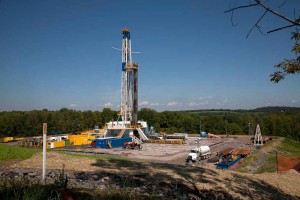