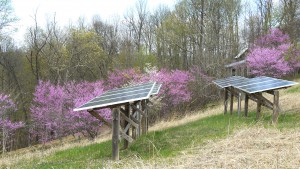 Renewable energy is sprouting up all over WV. A little leadership could accelerate our state’s transition to the new energy future. Photo by V. Stockman.

The Mountain Lakes Preservation Alliance and other groups have written an open letter to Senator Joe Manchin asking him to lead the state out of the fossil fuel quagmire / crisis we are in.

We write to express our concerns over the proposed pipelines, unconventional gas drilling, and fossil fuel development in our state. You may remember that Iris Bell wrote our state and Centennial song, “This is My West Virginia,” in 1961. In it, she speaks of the pride, strength, freedom, and principle that she felt marked our state and its people. Sadly, in WV today, our politicians seem to have abandoned principles for the lure of money. Today, we are in a crisis situation worldwide which begins in Appalachia, the gas region. We write to bring you the evidence of real problems in our state and ask your leadership at this crucial time in our history to save West Virginia, and the rest of the country, from the ravishment of fossil fuel development.

Now is the time to change the tide. Please honor our West Virginia heritage. We urge you to work now to preserve its resources and its natural beauty, step up your leadership, and help us move into a clean, secure future by leading the charge for renewables. As Christiana Figueres, Executive Secretary of the United Nations Framework Convention on Climate Change, said in May 2014, “We must leave the fossil fuels in the ground while we still have a chance.” Later may be too late.

Contact Senator Joe Manchin with your own concerns on our state’s continued over-reliance on fossil fuels and continued inaction on climate change.