The first time I spoke with James Olbert, I was completely engaged by his story. He phoned me in my capacity with the West Virginia Council of Churches, wondering if there was anything we could do to help. A self-effacing, pleasant man, Mr. Olbert was obviously deeply distressed. His family cemetery had been purposely bulldozed by a gas company making a road. He related that a passerby had called to the workers, didn’t they know there was a cemetery there? Contrary to the company claims that the desecration was “accidental,” the workers not only knew there was a cemetery, they knew exactly who was buried there. The racial slur uttered by the worker confirmed that. The family had been trying for six years to obtain amends and justice, but the process seemed to have stalled.

The Council did help, and so did OVEC. The WVCC’s Rev. Jeff Allen, and OVEC staffer Rev. Robin Blakeman and I went to visit the cemetery with James Olbert and another family member James Early. We saw for ourselves the dislocated grave stones, and metal markers placed by funeral homes scattered over the road. We asked if the family would like to have the site re-consecrated after the terrible desecration that occurred there. That appealed to the family, and we worked with Mr. Olbert to schedule the ceremony in August 2010, at the time of the family reunion. Local Pastor Willie Lewis joined us for that moving ceremony, at which the children planted flowers and placed a new sign reading “Crystal Block Cemetery.” Members of the Olbert family plant mums at the Crystal Block Cemetery. Photo by Carol Warren

OVEC staffers and Council of Churches representatives were present to support the family when a number of Certified Questions on the case were presented to the West Virginia Supreme Court. The Council had filed an amicus brief at the request of the family’s attorney, Kevin Thompson.

The case was then sent back to Logan County and a court date finally set. It was with great relief and excitement that we learned that the family’s day in court yielded a jury verdict ordering Equitable to pay $700,000 in compensatory damages, $14,000 in repair costs, and $200,000 in punitive damages. This will certainly not make up for the suffering of the family members, or the insult to their beloved dead. But at least it is some measure of justice for people who have endured a very difficult ordeal. Equitable plans to appeal the verdict.

OVEC’s cemetery protection work is ongoing. For more information, contact Robin Blakeman at robin@ohvec.org and be sure to see this Internet page.

May 18 2018  Hoots and Hollers
Asking You to Sign On to a Couple of Letters, Upcoming Events

May 7 2018  Hoots and Hollers
Reserve Your Free Ticket Now for “Reflections on Sacred Actions for Earth;” Tabling Available

Dec 2 2017  Hoots and Hollers
Comments of Rev. Robin Blakeman at the Hearing on the Proposed Repeal of the Clean Power Plan 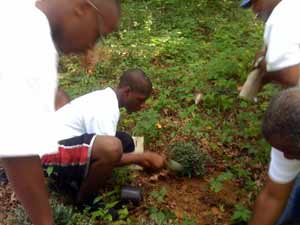