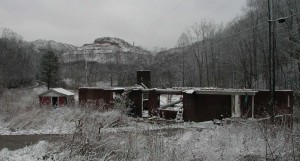 This was one of the last homes in the town of Mud, formerly in Lincoln County, one of many communities driven to extinction my mountaintop removal coal mining. Photo by Vivian Stockman

When I first read this document 12 years ago, it infuriated me. Starting on page 13, the essay includes points that amount to a depopulation plan for southern West Virginia. I think it infuriates me even more now, after everything that’s happened since then. The latest: the January 9 “leak” into the Elk River of 10,000 gallons of a chemical used in coal prep plants from an uninspected,decrepit tank farm and the subsequent poisoning of the water supply of about 300,000 West Virginians, a water crisis that is still unfolding today, nearly a month later.

We truly are in the coal industry’s way, and what better to get us out than to poison the water and air?

The essay was presented to a “Social Issues” Sunday School class at St. John’s Episcopal Church in

Charleston, WV in January, 2000. It was in response to an earlier presentation made by John Taylor, who was then co-chair of OVEC’s board of directors. Taylor authored the WV United Methodist Conference Resolution opposing mountaintop removal. 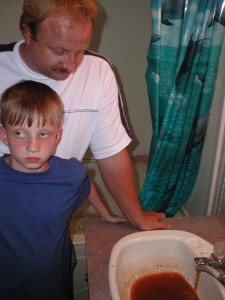 Mr. Snyder gave his permission for the use of this paper to Ewen. At that time, Mr. Snyder was a partner in the law firm of Robinson & McElwee of Charleston, which represent numerous coal companies and other large businesses. This paper is not, however, an official reflection of that law firm’s view.

Official or not, it sure does seem that the coal barons are trying to drive us away, to make our homeplaces unlivable, to get us pesky hillbillies out of the way so the coal industry can do whatever the hell it wants to our land, our water and our heritage.

I urge you to support the Appalachian Community Health Emergency Act, the ACHE Act. Learn more and take action here.