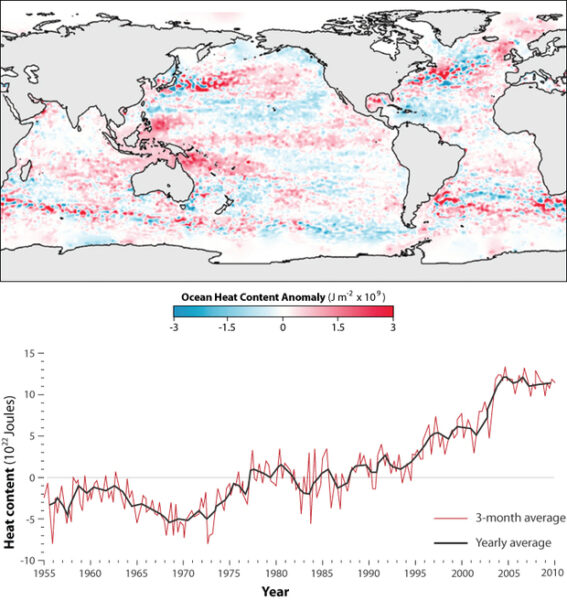 When we talk about climate change, we often fail to recognize the role that our oceans play in the bio-chemical cycles of the planet. We know from biology class that the planet is made up of spheres. The lithosphere includes the planet’s surface from the mountain ranges to the valleys. The biosphere includes all the living organisms in our ecosystems, all the microorganisms, all the plants and all the animals. The atmosphere includes the layers of air surrounding and protecting the planet, which start at the surface and reach up to 10,000 meters into space. The hydrosphere contains all the solid, liquid, and gaseous water of the planet. The hydrosphere extends from Earth’s surface downward several kilometers into the lithosphere and upward about 12 kilometers into the atmosphere.

Scientists tell us that the absorption of atmospheric carbon dioxide by Earth’s oceans has led to their “acidification.” What does this mean? Ocean water combines with carbon dioxide in the atmosphere to create carbonic acid, the same acid in your soda pop. The higher the concentration of carbon dioxide in the atmosphere above the water, the more carbon dioxide that is absorbed. According to the National Oceanic and Atmospheric Administration, “in the 200 years since the industrial revolution began, our oceans have seen a drop in pH of about 0.1 pH units.” This might not seem like much but remember, the pH scale is logarithmic, so that drop means a 30 percent increase in ocean acidity.

As the oceans acidify, the organisms that inhabit the oceans are negatively impacted. Oysters and clams that make hard shells are particularly affected by acidification. The carbonate ions that organisms use to make shells instead combine with the excess hydrogen ions from the acids. This means less carbonate to make shells. Also, the lower pH of acids can even dissolve shells. A similar reaction is happening to ancient monuments affected by acidic rain.

The oceans have seen unprecedented increases in water temperatures. A map produced by scientists of NOAA and NASA shows temperature increases in the oceans from 1955 to 2010. The overall increase in ocean heat content during those 55 years is equivalent to 2.5 billion times the energy released from the atomic bomb dropped on Hiroshima, Japan. Data shows that 90 percent of the heat increases on the planet have gone into the oceans and they show significant warming at the surface as well as in the depths of the oceans. The ocean warming has also led to sea level rise as warmer water expands.

Another factor to consider is that water has a high specific heat, meaning it holds heat for a long period of time. When water is warmed, it takes a long time for it to cool down. Ocean temperatures today are a result of the enormous amount of heat that has been absorbed in the past 55 years.

This heat can damage organisms. An example of this can be observed at Australia’s Great Barrier Reef. This reef is the largest coral reef in the world and home to more than 1500 fish species. It is so large it can be seen from space and is one of the seven natural wonders of the world.

The reef is a source of food and provides protection from storms. In terms of its economic value, it represents $6.5 billion to the Australian economy drawing more than two million tourists each year. In 2016, a massive heat wave killed thirty percent of the coral reef. This death, often called bleaching, happens when algae called zooxanthellae die. They are blue-green in color, therefore once they die the reef appears white. These algae have a symbiotic relationship with reef-building corals supplying energy and nutrients. Without them, the corals themselves often die.

Trout fishermen know that trout like cold water, oxygen-rich streams. Warm water does not contain enough oxygen to support many fish species. As our oceans warm, they are losing oxygen gas. Andreas Oschlies, an oceanographer at the Helmholtz Center for Ocean Research Kiel in Germany, has a team that tracks worldwide oceanic oxygen levels. He said, “We were surprised by the intensity of the changes we saw, how rapidly oxygen levels are going down in the ocean and how large the effects on marine ecosystems are.”

The drop is worse in tropical regions which show a forty percent decrease in oxygen levels over the past fifty years, but even polar regions are seeing oxygen declines. These drops are especially harmful to zooplankton, which are the base of the ocean food web. Other species are affected and may not be able to reproduce as readily or get adequate food supplies. As oxygen-rich areas shrink, economically valuable fish like tuna, which globally generate $42 billion annually, are forced to find new habitats.

Lastly, climate change is affecting sea ice which in turn is affecting sea levels. Since 1880, the mean sea level has risen about 8-9 inches and a third of that increase has happened in the last twenty-five years. This rise is due to both thermal expansion of warmer water and also meltwater from glaciers and ice sheets.

As the ice melts, the sea level continues to rise. Scientists have used models to predict the best-case and worst-case scenarios of sea level rise. “Based on their new scenarios, global sea level is very likely to rise at least 12 inches (0.3 meters) above 2000 levels by 2100 even on a low-emissions pathway. On future pathways with the highest greenhouse gas emissions, sea level rise could be as high as 8.2 feet (2.5 meters) above 2000 levels by 2100.”

The United Nations report that eight out of the ten most populated cities are coastal cities and forty percent of the USA’s population lives near a coastline susceptible to flooding. Meteorologists tell us that as the sea levels rise, storm surge is worse. We saw this with Hurricane Katrina and Superstorm “Sandy”. Warmer water means more intense storms too.

Data taken from fossil cores of the oceans shows it has been 35 million years since the earth’s atmosphere held this much carbon dioxide. This data also shows that 55.8 million years ago there was a massive release of carbon dioxide. It could have been from volcanic eruptions, a breakdown of sediments or massive fires. At that time, the pH of the deep oceans dropped quickly as the carbon dioxide levels sky-rocketed. Sea life, especially shelled sea life disappeared rapidly and the sediment in the cores turned from primarily white calcium carbonate to red-brown mud.

“The main difference is that, today, CO2 levels are rising at an unprecedented rate.” If we continue on this path with little to no changes, our oceans could see pH values as low as 7.8. The last time the ocean pH was this low was 14-17 million years ago. At that time the Earth was experiencing warming as well as a major extinction event.

We know what past warming scenarios brought to the planet, yet we still are ignoring the issue and are reluctant to make any significant changes to our lifestyles. One might say we live in a country of “willful ignorance.”

Please get involved in OVEC’s local efforts to curb climate change. E-mail us at info(at)ohvec.org. 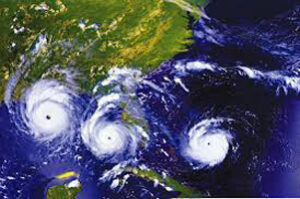