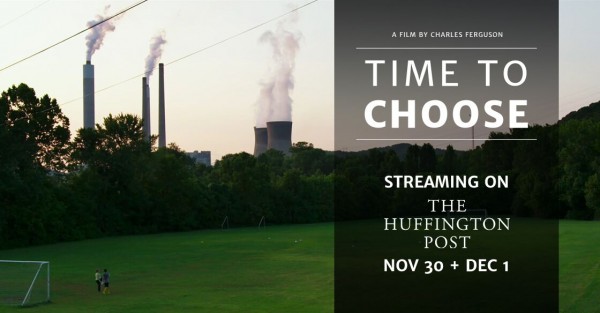 Update: the free streaming period is over, but you can see a clip of the film here. Follow the film on Facebook here and on Twitter here. Use the hashtag: #TimeToChoose.

Time To Choose, a new film by the Oscar-winning documentary director Charles Ferguson will be screened at two special events in Paris in two weeks during the UN climate-change conference (aka COP21).

The Huffington Post will offer the full film online one week earlier in a special event. You only have 48 hours to view the film!

The film premiered this past September at the Telluride Film Festival. Last year, OVEC’s media liaison helped researchers extensively before the crew arrived to film for the mountaintop removal portion of the documentary. Once the crew was here, our media liaison served as an on-the ground and aerial guide. OVEC members are interviewed in the film. We are thrilled to played a small part in this big film!

OVEC received an e-mail this morning:

Charles Ferguson is happy to introduce his new film, Time To Choose, which will make history by being the first feature length film to live stream on the Huffington Post homepage. Just as the international climate negotiations in Paris are kicking off, the film is now available for streaming for free for only 48 hours in the US, Canada, and a dozen other countries around the world. Global media entities have joined together to make this a truly global event.

Thank you for your hard work in assisting us create this film.

On the eve of Paris, Time To Choose can make a crucial contribution towards raising awareness about the threats we face and the solutions we have to audiences around the world.

Again, thank you for everything you did to help us complete this film, and we hope you enjoy the final product!

Michael Brune, executive director of the Sierra Club, says this of the film: 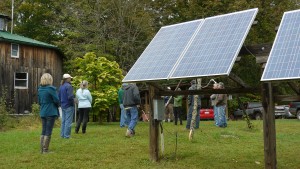 Everything’s changing, fast. That’s obvious when you watch Time to Choose, a new film by Academy Award-winning documentary director Charles Ferguson. But although Ferguson’s film acknowledges the enormity of the challenges the world is facing, it’s even stronger on the rapid rise of available solutions.

Before of after you watch the film, please take some time to read this powerful statement, which is an open letter to all participants in COP 21 from those of us living in energy sacrifice zones worldwide. 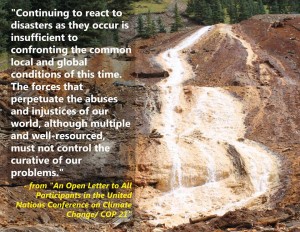 They call us “sacrificed.” We live in homes, neighborhoods, communities, and regions where industrial pollutants invade our waters, our air, our lands and our bodies. We are the inhabitants of blown apart mountains, we walk atop the land of aging and feeble pipelines, we are those who wait at the intersection for the tanker trucks and bomb trains that run day and night through our communities. We are the children of oil streaked and fracking contaminated waters, of the deadly and toxic tar sands, of the stolen trees and scorched earth, of the uranium polluted desert sands, and the survivors of those living and dying in the shadows of refineries and chemical plants across the continent. We are the residents of justice denied, and we write to you today in one voice.

Our organizer, Dustin White, was among those invited to be some of the first representatives of energy sacrifice zones to sign the letter. You can sign either as someone living in a sacrifice zone or someone supporting those who do. Scroll down at this link to sign. The Earth is not a sacrifice zone for fossil fuel fools.

Here’s to real, community-based, community loving solutions being front and center at COP21. 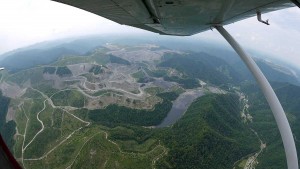