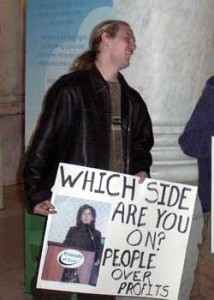 This photo by Abe Mwaura from 2005 illustrates the problem. Back then, we captioned the photo, “Who does she work for, anyway? Scott Straights poster includes a picture of DEP chief Timmermeyer speaking at a Friends of Coal meeting. This photo was featured on the DEP website’s home page.”

Last night I started watching Triple Divide, about deep shale gas fracking in Pennsylvania.  I purchased a copy of the DVD from the Mountain Watershed Association last weekend, when I attended the No Fracking Way gathering.

My dog looked at me funny when I yelled “What the frack!” at the TV. I was reacting to the voice of Chesapeake Energy’s director of federal affairs, a voice I recognized as belonging to Former DEP Secretary Stephanie Timmermeyer.

A quick Google search yielded Regulator, Captured: The Stephanie Timmermeyer Story, a research piece that shows I was either not paying very good attention, or had perhaps been in deep denial about how fast the revolving door between the “regulators” and the “regulated” spins.

The article mentions what we hear in Triple Divide (the statements inside the quotation marks below):

Timmermeyer’s most recent press mention came last November, when she announced that Chesapeake

would spend $25,000 to seal off a residential water well contaminated by a blowout at one of the company’s many Pennsylvania natural gas wells – not because Chesapeake was responsible for the contamination, but simply “to be a good neighbor”:

Timmermeyer stated, “It was pretty clear that this water quality was always at this state and it was just

something that we offered to do and agreed to take care of.” … Chesapeake highlighted Timmermeyer’s “public service” as a former Cabinet Secretary in West Virginia.

Another interesting/disgusting snippet from that article confirms what many suspected:

Years later, multiple sources told the New York Times that Eustace Frederick, a powerful state legislatorwith coal industry ties, said to Timmermeyer point-blank that her nomination to the DEP’s top job would be confirmed only if she agreed to fire Crum.

Channel your outrage over stuff like this by showing up at noon on September 23 for our Huntington-area rally in support of The Great Ohio River Relay. More details soon…