Ronnie Cummins is the director of the Organic Consumers Association (full disclosure: I had a six-month internship with OC A in 2002). In his “Message From Marrakesh,” Ronnie argues that if we are to avert catastrophic climate change, not only do we need to ramp down greenhouse gas emissions extremely rapidly—we also need to sequester some of the excess carbon dioxide that’s already in our air

A numbers of ideas for the sequestration of carbon are afoot, including various notions of “geoengineering”– dangerous experimentation with critical systems of the only planet we’ve got. I firmly oppose such recklessness, and the urge to avoid emissions reduction which often underlies discussions of geoengineering.

But what Ronnie’s talking about is not reckless or untried; he’s pointing out that agricultural practices which improve soil fertility also sequester the carbon in carbon dioxide. In essence, we’re putting back most of the 136 gigatons of carbon withdrawn from the soil by deforestation and bad agricultural practices in the past few millennia. If we can stash106 gigatons back in the soil where it belongs, we can get the level in the atmosphere below that 350 ppm threshold often identified as a safe level. Here is a link to the 16 page PDF that goes into the soil science involved in plans to do this. Much of this is based on new information coming from research in what is, in my opinion, one of the most exciting and useful research fields right now–the biology and ecology of soil organisms. The paper claims that if the entire world converted to this system, we could draw down all the CO2 to get below 350 ppm within five years! Of course, that would also require that we drop our emissions to zero…which isn’t gonna happen either. Nonetheless, these numbers indicate the potential to solve problems over a longer period.

The paper lists quite a few sources at the end. I wonder how credible they all are. I have seen claims of this sort before, and there is some research to back it up, but, for example, one source is the Rodale Institute, whose mission is to research and promote organic agriculture. Perhaps they are not entirely unbiased. My conclusion: given its importance, further research into the potential of different approaches in agriculture to simultaneously maintain decent yields of food and fiber, improve the health and long-term viability of the soil, and sequester carbon, thus getting it out of the air, ought to be getting plentiful research dollars. But that would be in a world where the future mattered, where facts mattered. If we lived in that world, we wouldn’t be in this fix in the first place. Lately I’ve been wondering if there’s any way I can get a visa to travel to that world…

Failing that, I’m looking into starting up a Regeneration Circle here in the Roane County area. This is what OCA suggested as a response to the situation: groups meeting one Thursday a month to talk about what they can do locally to advance regeneration-oriented, responsible agriculture that both improves the soil and sequesters carbon. It’s a matter of repairing natural cycles, because the very carbon that causes climate change when in excess in the atmosphere (in the form of CO2)… instead creates fertility when it’s in the soil.

A similar situation obtains with the excess nitrogen and phosphorus from CAFOs (confined animal feeding operations) and monocultured crops sprayed with synthetic fertilizers. The excess nitrogen and phosphorus from enormous concentrations of manure inevitably finds its way into waterways, as does runoff from fertilizer use.  In rivers and ultimately the ocean, it causes algal blooms and dead zones. But nitrogen and phosphorus can instead enhance soil fertility, obviating the need for artificial fertilizer (mostly derived from oil and gas, by the way), with the right practices. Like when manure is spread around from small, multi-cropping family farms that follow good practices like cover cropping , rotation of crops and well-managed grazing.

I could even compare it to the leaves I rake off my gravel lane every fall, to haul home, shred and compost in bins. A year later the rich, black leafmold makes an excellent addition to my garden soil; but I also do it because I don’t want the road to be soft and deep and spongy like the garden. Again, redirecting fertility from where it doesn’t belong—the air, the water, the road—to the soil solves two problems. This is the other meaning, I think, of Regeneration Circles—by reconnecting natural cycles, we are agents of regeneration. And there is much we can do, in our own yards and gardens and in our food purchasing, to reconnect these circles, to be agents of healing. 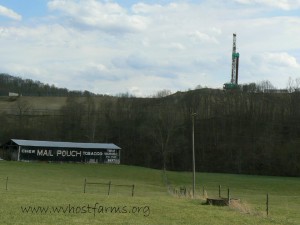