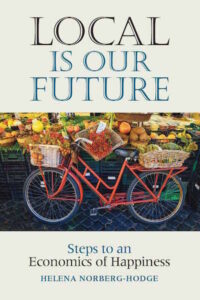 Helena Norbert-Hodge (NH), winner of the GOI Peace Prize and the Arthur Morgan Award (given to those committed to working for community, democracy, entrepreneurship and individual character), is a pioneer of the localization movement. Her thesis is simple: in order to return to a ife where happiness and peace and joy, rather than depression and alienation and isolation, are paramount in the lives of people, globalization must end.

In 1975, before globalization was introduced to Ladakh, or Little Tibet, NH, a linguist, moved there. She encountered people who were not wealthy but happy, secure, free, joyful, and peaceful. Their needs were almost entirely met through local business-consumer interface as well as through political accommodation. In a decade, she saw profound changes wrought by economic globalization: a few people became rich and powerful, others poor and disenfranchised—and the ensuing inequality led to high levels of anxiety and depression as well as physical violence.

NH sees the last 40 years of the increase in economic globalization as taking a dramatic toll on the well-being of humanity for an extraordinary benefit to corporations and businesses. (The 1987 film Wall Street is a visual example of how greed works.) As an example, she notes that the wealth of the eight richest people on earth surpasses that of four billion people, nearly half the world’s population. This finding supports that of many others, including at least two current candidates for president of the United States.

Increasingly, and especially with the rise in climate chaos, bigger is not viewed as better, and high technology is not seen as increasing the quality of life. but rather as the cause of working more with less satisfaction (and compensation), leading to increased distress, isolation, and guilt at not feeling happy at our supposed “progress.”

Economic globalization, meaning free-trade based on deregulation of banks and business, has
many consequences, including an increase in CO2 emissions not counted for in a nation’s
carbon accounting (thus, emissions are higher than reported). The development of a single
world market has led to not only a vast increase in wealth and profit for a few, but also to an increase in pollution, a decrease in corporate tax rate and revenue, and a relaxation of labor standards enforcement. Workers and municipalities suffer because of this.

NH uses the recent expansion of Amazon as an example: to win Amazon jobs, Arlington, Virginia, has promised some $5 billion in incentives. Yet, overall, this company has cost 150,000 more jobs than it has created. If you use Amazon, are you supporting joblessness? Think about it.

In the U.S. alone, billions of dollars are given in incentives to lure business, including free land, infrastructure assistance, tax incentives, and low cost financing. And, many of the companies that get these benefits pay zero dollars in taxes each year. It is a truism that Warren Buffet, CEO of Berkshire Hathaway, pays less in taxes than his secretary!

NH notes that international trade has grown 27 times between 1950 and 2016, resulting in the
transfer of enormous wealth: of the 100 largest economies in the world, 69 were corporations.
Shell’s GDP is larger than 138 countries, and Shell is awarded billions of dollars each year in
subsidies and tax cuts.

It is estimated that NAFTA has cost nearly 630,000 jobs from its inception in 1964 to 2013, despite it being touted as a job creator. Who benefits from NAFTA? Corporations, not people. And, corporations continue to reap benefits from the Investor State Dispute Settlement (ISDS) pact, which allows them to sue governments when their profits are threatened.

NH cites examples of “redundant” trade and unnecessary business practices: in Sweden,
potatoes are flown to Italy to be washed before being returned to Sweden for sale; cod from
Noway are filleted in China before being flown back to Norway for sale; lumber from one country
is often exported while, at the same time, it imports lumber from another country. And, in the US,
meat, potatoes and other products are exported while importing similar products. All of the miles
food must travel before the consumer is able to purchase it increases transportation costs (and
emissions), and adds to the use of chemical additives and preservatives to prevent spoilage en
route.

The human toll of economic globalization comes with an increase in fear (job insecurity),
fundamentalism (extreme adherence to free-market principles despite contrary to evidence),
political instability (due to the inability of insolvent governments to provide basic services), and
an increase in the influence of demagogues to manipulate public opinion, because people
without hope for their future will support anyone promising hope, despite the ability or will to
deliver it or not.

So, if the mantra is, “No more ‘more, more, more,'” what takes its place? The movement to
increase commerce at local levels as much as possible is NH’s response. Research on
localization movements suggests that when agriculture is not so specialized as to provide only
one crop at the expense of biodiversity, as large agribusinesses do, diverse food supplies
increase, the use of chemicals and energy-using machinery decreases (reducing greenhouse
gas emissions), the need for protective packaging decreases, there is an increase in local
distribution of wealth and face-face communication between consumer and producer increases.
This latter can lead to a better doctor-patient ratio and closer teacher-student relationships.
NH-Hodge calls this the “solution multiplier” effect of localization.

Such a wide scope of change entails both grassroots and political impetus. A new discussion
will need to take place, asking “growth for whom at the expense of what?” The new purpose of
trade will change from increasing GDP gains and profits for the wealthy few, to providing
markets for surplus production and to obtain goods not produced domestically. There exist ways
to do this: the “Alternative Trade Mandate” is one, which allows countries, regions and
communities to regulate production, distribution and consumption of goods and services, while
at the same time holding corporations accountable for negative environmental impacts of their
operations.

Norberg-Hodge ends her hopeful book with a transcript of a conversation with Wendell Berry, a distinguished author, farming advocate and environmentalist. Together, they further the discussion of local farming, production, and environmental advocacy. They aver the necessity of taming an
industrial society which has, “driven up the price of human labor and artificially lowered the price
of energy and technology, while throwing more people on the garbage heap.”

We can change this. Vote! Support your community at the local level! Join and volunteer with OVEC. Contact us at info@ohvec.og. 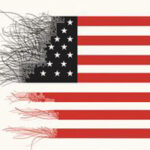 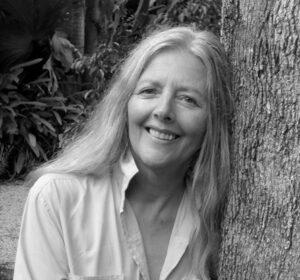