Drawdown was a major collaborative effort involving 70 research fellows from 40 countries. It’s not so much a cohesive plan as a list of partial solutions: 80 that are tested and in use at least somewhere in the world, and another 20 that are speculative. The book has a few essays but is primarily composed of descriptions of these possible solutions; each comes with estimates of its potential impact on climate, and a ranking (and a picture, naturally).

These numbers are speculative, of course. One of the things I found surprising was the estimates in a few cases of the potential of solutions—in particular, a back-to-back pair: using bicycles instead of motor vehicles in cities was estimated to increase from 5.5 percent of trips in 2014 to 7.5 percent by 2050. But green roofs and cool roofs (that is, roofs with turf on top and roofs with reflective metal that sends solar radiation back) are estimated to grow to 30 and 60 percent, respectively. That totals to 90 percent as the two are different approaches with no overlap. I can only think that people doing the bike chapter were much less optimistic than those coming up with numbers for the green roof piece.

The other issue with numbers is the question of double counting, of overlap. For example, it seemed to me that farmland restoration, regenerative agriculture, multistrata agroforestry, silvopasture, tree intercropping, managed grazing, pasture cropping, and intensive silvopasture are not really eight different schemes, but three. A problem with any assessment of climate change is assigning categories and avoiding overlap. For example, take a truck bringing corn to an ethanol plant—is that in the transportation sector, the agriculture sector, or the energy production sector? But the authors claim they “made sure to avoid” double counting; perhaps I misunderstood the differences between some of these things. Anyway, I don’t think the numbers are the important part of this effort.

I’m going to name three things I liked in this book, and one I disliked.

First, the inspirational bits, especially in the essays not devoted to a ranked scheme, were truly inspiring to me. Please understand that I am a cynical old pessimist, so this means they did a fine job on the vision and inspiration aspect. I’m not the kind that thinks “love” is a solution!

I also liked that the sections for nuclear power and biofuels called these “regrets solutions,” which we may have to use temporarily but in contrast with most of the solutions in the book, these have a major downside the authors recognized. What they called “waste to energy” was another one (capturing the energy from incineration of trash).

But my favorite part of this book was that it introduced me to several approaches of which I’d previously been unaware—and since I read quite a bit on this subject (notably on the resilience.org site), this was a pleasant surprise.

Some examples: smart glass, which works like photogray eyeglasses, darkening when sunlight is brightest, thus reducing heating and air conditioning loads in buildings. That one’s already out there. Another thing already out there was the Kigali Protocol, a binding treaty to phase out the substitutes that replaced the CFCs and HCFCs phased out by the Montreal Protocol. The HFCs now commonly used in refrigeration and air conditioning don’t hurt the ozone layer but are extremely potent greenhouse gases, so the safe disposal of them at the end of the life of these appliances is critical—so critical that this step was rated number one in importance, capable of reducing warming by nearly a full degree Fahrenheit! And I hadn’t even heard of it, or the treaty already in place to solve the problem.

In the speculative section at the end, there was this intriguing item: Repopulating the mammoth steppes. The argument is that repopulating the Arctic with herbivores will prevent the warming that could release horrendous amounts of frozen methane, because these animals survive by scratching off the snow to eat frozen grasses, and reducing the snow cover leaves the ground a few degrees colder. I did wonder about the exposed vegetation being darker than snow, but the theory includes the idea that herbivores keep the land in grass, rather than trees and shrubs which are also darker.

Then there is ocean farming—I initially reacted warily to this idea, thinking that supposed husbandry of yet another biome will just do more damage. But this concern was extensively addressed. They pointed out the difference between industrial monoculture and small, diverse farms, which is what they propose here. Another section talks about suspending grids 82 feet below the surface far offshore, to create coral and kelp forests which would be the base of ecosystems that produce edible seaweeds and fish while sequestering carbon…and could be hooked to pumps to bring up cold, nutrient-rich water from the deeps. Yet another section claims that feeding cows and other ruminants on seaweed, especially a particular red algae, causes them to thrive while drastically reducing their methane emissions (created by inefficient digestion). Some of this, while bold interference with marine nature, may actually restore ecosystems—and yes, it’s noted that there must be large marine parks where nature is untouched and wild.

The biggest negative for me was in the things the book didn’t mention or barely touched on—extremely important, if inconvenient realities. First, population: it was mentioned, but lightly and with an assessment that saw getting to “only” 9.7 billion humans in 2050 as the hoped-for outcome. Any approach besides providing birth control and educating girls was not to be countenanced. I don’t believe the Earth can support 9.7 billion humans sustainably, no matter how we live.

Similarly, while never directly addressed, it seems to be assumed that capitalism and economic growth will continue unchecked. But income and resource consumption are tightly linked—sure, many of the projects outlined in the book would allow greater efficiency, minimized impact. But there are limits, and as long as capitalism is our modus operandi, there will be the Jevon’s Effect. If only voluntary restraint can be countenanced, then the great savings attributed to most of the schemes in the book will only encourage more consumption.

Finally, there is the reality that instituting many of the plans would require government investment or regulation—but increasingly, the world’s governments are run by the elite for their own economic benefit. So how do we get there from here? Drawdown talks about the need to graduate from our current cultural focus on competition to move into a mode of cooperation, with each other and with the rest of nature. Very true—but is this enlightenment going to happen as a sudden sea change in the attitude of billions of individuals, against the opposition of the tiny minority who hold the power? People are very much influenced by media, which are owned and controlled by that elite—who seem to want nothing but the status quo.

Perhaps these choices were made in order to make the book appealing to a wide spectrum of people, including the elite. It repeatedly claims that solutions would actually save money. Or, perhaps the mandate the Drawdown team gave themselves was to lay out the possible solution—the technical solutions–to the complex problem of climate warming, and leave it to someone else to put the pieces together into a comprehensive, step-by-step plan. After which it’s up to all of us to apply increasing pressure on the “leaders” (through our consumer choices as well as voting, massing in the streets and other tactics) to take the first steps down that path toward the better world we could have if we succeed. To me it seems that the barriers to making the changes we so desperately need have never been in the realm of practical, technical possibilities. If the sea change in human attitudes envisioned in the inspirational pieces of this book happen, magically or otherwise, then the book will offer useful information on the practical means of making the change. 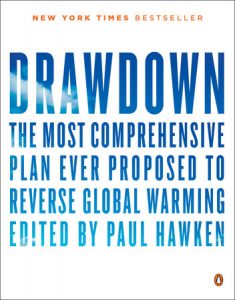