Chris Smaje has been a lecturer in sociology and is now a small farmer and writer, living in England. His book, A Small Farm Future (Chelsea Green Publishing), springs from his blog of the same name. The book’s subtitle summarizes it fairly well: “Making the case for a society built around local economies, self provisioning, agricultural diversity and a shared Earth.”

Perhaps I should begin by noting that since I have been following Smaje on Resilience, and was already in agreement with his theses before I read his book, some might say I’m biased. There was very little I disagreed with; however, there was quite a bit I didn’t know. I’m glad I have a paper copy, as I will be rereading it and using it in discussion.

Before getting into the parts of the book, I will say something about the level of diction; it requires continuous attention to follow the thread of often complex argument. This is not a book to read over a long period, or while doing other things.

In the first chapter, Smaje delineates “ten crises”: population, climate, energy, soil, stuff, water, land, health and nutrition, political economy, and culture (yes, it’s quite a long chapter). In the course of discussing these issues he makes the case that we can’t just stumble on with business as usual—that won’t be possible much longer. Then in the rest of the book he argues that a small farm future is the best of possible responses to these crises, the best way to negotiate a future that avoids the inequality that plagues us today, and often has in the past, as well as to repair the ravages inflicted on our only planet by neoliberal capitalism and industrial farming. Yes—he takes on capitalism.

He also takes issue with such notions as inevitable “progress,” (shades of John Michael Greer), ecomodernism and the disparagement of peasantry as “backward” as well as practical issues like the idea that we can’t afford to have livestock in a properly ecological agricultural system, and the promise of perennial grains. He has plenty of ammunition in making these arguments; the section in the back of citations and bibliography takes up 23 pages.

A quote from Part I: “We slip too easily into overdrawn dualities that insist we must choose between endlessly revolutionising high-tech automation or primitivist anti-technology—a false opposition between industrial agriculture and digging sticks.”

My favorite section is Part II, Small Farm Ecology. This is where he looks at the evidence around such issues as whether livestock belong in the small farms of the future, the practicality of agroforestry and forest gardens, the likelihood and desirability of developing perennial grains, and the question of whether small farms can feed the world. In each case he came down on the side of the question I leaned toward, but now I have some information to feed into the debates.

My quote from this section looks at the ethical questions, the questions of justice, that inform the whole book:

…if…it turns out that the way you eat is too costly in terms of energy, GHG emissions, soil health, water or someone else’s well-being, there’s a good case for trimming it back to what your locality can sustain. And if it’s impossible to trim it back to a sustainable level, that may suggest a need to re-sort human populations more sustainably across agricultural space.

It seems likely that the coming years will see a major re-sorting along these lines due to climate change, energy descent, water stress and economic crisis, generally from cities to countrysides, from coasts to interiors and from lower latitudes to higher latitudes. The potential for conflict in this process is high; in Parts III and IV of this book I address how it might be minimized socially and politically. Here, it remains for me to sketch what it could look like agriculturally in terms of a self-reliant local food culture that minimizes its colonial exactions upon others.

He proceeds to create a model for 2050 England, coming up with charts of the energy and fertility inputs for different kinds of growers, the expected outputs, and an average diet resulting from this exercise. He concludes that it will be possible to feed the 83 million people he imagines Britain having in 2050 (including refugees).

Part III looks at the social aspects of a small farm future: how to avoid the historically common domination of women, how markets might be arranged, what patterns of land-holding might be preferable (for example, he looks at the pros and cons of commons, and how commons and private property might be intermixed). He even includes religion and science, from whence comes the quote for this section:

…science and progress have slipped the moorings of self-critical practice to become transcendent ideals, perhaps the major form of sacredness in our times. Prophets of science and progress like Steven Pinker and Richard Dawkins then present the 18th century Enlightenment that laid the foundations for modern science as exemplary not of self-critical inquiry but as sacred truths to be defended from infidels and heretics, which is why their denunciations of religion end up sounding so dogmatically religious.

Part IV looks at how we might get to this small farm future, especially in relation to how states are likely to evolve as they weaken in the challenging future we face. He defends the notion of progressive populism, looking back to the farmer’s movement in the U.S. that ended in defeat 100 years ago. Here’s hoping it goes the other way this time! It likely improves the odds if we discuss and prepare for a small farm future; and reading this book can help. I envision study groups passing around a copy and then discussing it. 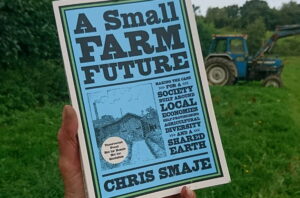