I’ve been harvesting potatoes lately, so while I’m thinking about them, let’s talk spuds. First of all, why grow them?

How about: because they are a usually reliable crop, yielding more calories per square foot than just about anything else, and a respectable amount of protein. Because they’re easier to store than most produce, as long as you have a cool, dark, moist space (I use a root cellar but an unheated garage or basement room might work well). They don’t need canning or freezing or drying, and will keep for several months under appropriate conditions. And because you can make so many delicious meals from potatoes. There aren’t many crops so versatile. So, if you’re gardening for food, potatoes are a top choice.

Sometimes you see claims that someone is “growing my own food” in a tiny garden, or, for example, there is that couple in Quebec who claim to “feed 200 families” from an acre and a half. That isn’t possible, of course; they mean 200 families get a little bit of greens at some point in the year. A small garden may yield a good bit of produce but to make a big impact on the grocery bill—to provide the food your family relies on—that takes more ground, and more than greens. Grains may be the trickiest component of the diet to grow (and process) for yourself—but you can substitute potatoes, to supply a lot of carbohydrates and protein.

Potatoes are normally bought as seed potatoes, cut into chunks with a couple of “eyes” (sprouting places) per piece, and planted in rows in late March or April. They can be planted even in May around here. Then ideally they are hilled up at least once. This means hoeing up dirt from between the rows, up onto the rows to cover the young plants, leaving a couple of inches sticking out. You do this because the tubers form above the original seed potato, and if they are exposed to sunlight they turn green and poisonous. You can also cover them with a lot of mulch instead, but sometimes that packs down and gets thinner by harvest time. So it’s good to hill them up and then mulch. You mulch for the same reasons you mulch everything else: to suppress weeds and to hold in soil moisture (especially important in a dry year like this one!)

Potatoes do best in somewhat sour soil of average fertility. A low pH keeps scab away—but you need to rotate crops, so if your potatoes this year are growing where something else that wanted a neutral pH grew last year, how can you give them that sour soil? Well, you can’t, but they’ll still likely be all right, especially if you can find a scab-resistant variety. This is one reason I like Red Norlands but they can be hard to find as seed potatoes. I don’t like to buy my seed potatoes online as a five pound bag costs half as much as a fifty pound bag bought locally. So I don’t have too many choices but the Kennebecs seem to do pretty well in neutral garden soil.

Some years you get enough potato beetles to damage the crop. This is one of those pests that can multiply to the point where you have to do something, even in a landscape with balanced ecology…although I don’t see them at all most years, probably because of that balanced ecology (the first few that happen by are eaten). There is a solution—a naturally occurring organism known as spinosad. You can buy it locally and spray it on your whole crop, once or twice, and that should take care of it.

You don’t need to water potatoes late in the season. I haven’t watered mine at all, and the ones in my raised beds, planted early and heavily mulched, are yielding quite well (although I’m getting some mouse-chewed and some green-shouldered ones). The ones I planted late in the flat space I call Central, however, sprouted poorly as I failed to water their dry ground—I didn’t mulch them because I was waiting to hill them up first… after they got tall enough… but most of them never sprouted because it was too dry.

I like digging potatoes (except for the time I discovered the bees’ nest…) because it’s like a treasure hunt. You don’t know exactly what you’re going to find. Yeah, of course it’s going to be potatoes—it hasn’t happened yet that I found zucchinis or golden eggs under a potato plant. No secret decoder ring, no buried treasure. But will it be several big long, perfect potatoes? Or just a few marbles, maybe an oddly shaped one? Or, every now and then, a rotten one… or one remaining end of a perfectly good potato that fed a mouse for a week. I don’t begrudge the mice too much—at least I can still use a potato with a nibbled spot, after cutting it off. Whereas the green ones should be discarded even if it’s only partly green, according to Carol Deppe in Resilient Gardener. She says you can’t feed them to livestock either. I must do a better job of hilling up, in future years.

If you can grow your entire year’s supply (which is a lot, for this household), you can save your own “seed”—meaning some potatoes you will set aside to cut up and use for next year’s crop. However, you need to do a careful job of rogueing out any diseased ones if this is your intent. Diseases can transmit from year to year, which is why you’re supposed to get rid of any volunteers popping up from ones you missed when you dug them last year. And don’t plant them where you had potatoes the last couple of years, or ideally, their kin—tomatoes or peppers or eggplants. In a small garden, this may be unavoidable—in which case, plant them anyway, they’re such good food and easy. 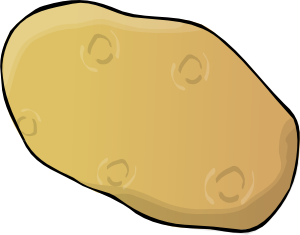