Here’s the press release we sent out yesterday about Maria Gunnoe’s testimony (and the Alliance for Appalachia’s upcoming End Mountaintop Removal Week in Washington) at a Congressional oversight hearing, which starts at 10 a.m. today. You can watch the hearing on live streaming starting at 10 a.m.

Here’s Maria’s written testimony and check out this photo, which she will show as she speaks.

Maria, thank you! Appearing before this committee takes some big courage, IMHO. But hey, Maria’s a veteran at this — this is the third timed she’s testified before Congress.

Update: Maria was going to show this photo while she spoke, but the committee staff  told Maria the baby in bathtub photo is inappropriate for the hearing and they will not let her show it! 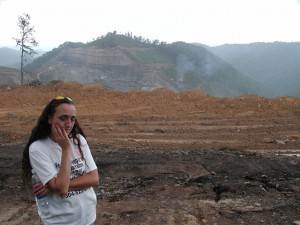