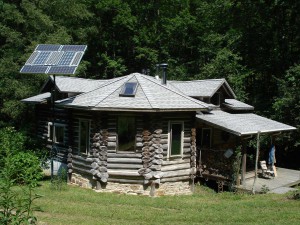 A letter to the editor alerted me to my chance to finally see a microhydro system. On January 18, Vivian Stockman and I visited Mickey and Jennifer Janowski, who live at an elevation of 2,250 feet in Webster County, W.Va.

We didn’t go to admire their log home, which they built themselves — but we did that, too, while we were there. They’ve had an off-grid solar power system since the 1970s, but it was minimal: 500+ watts with a less-than-ideal exposure. However, they live on a lovely, reliable creek. So, with help from Matt Sherald, owner of Power In My Backyard (PIMBY), Janowski recently built a microhydro system to supplement the solar power system. They used a turbine called the Stream Engine, created by Paul Cunningham of Energy Systems and Design. 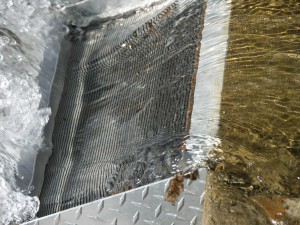 The screen that filters out debris. Janowski built the box on which the screen rests. He says he made the box with the front overflow less than an inch above the top of the 4″ intake pipe. But now he realizes the box needs to be deeper, creating a deeper water reservoir, That will prevent air from entering the intake. Air in the intake reduces the water pressure during some flow conditions. It is a minor tweak to the system that Janowski will make in drier summer weather.
Photo by Vivian Stockman.

The upper end of the system.
Photo by Mickey Janowksi.

Construction of the upper end of the system.
Photo by Mickey Janowski.

The upper end of the system is a concrete weir in the creek, a sort of dam with the water channeled through a box in the center of a spillway. The box has a screen that filters out debris . The screen was designed and fabricated by Marvin Woodie and Larry Agnew from Conn-Weld Industries in Princeton, W.Va. Water seeps through the screen into the box, where it is channeled into an intake pipe. A concrete pillar nearby holds the intake pipe steady in the sometimes-turbulent creek.

In order for the water diverted from the stream to the pipe to have enough energy to turn the Stream Engine turbine, it had to course along a hefty drop in elevation. Janowski buried more than 500 feet of four-inch PVC pipe from the intake right below his home to a little building, the powerhouse, where the turbine is housed. That gave him a 47-foot drop and 750 watts of power — power that, unlike solar, runs 24 hours a day. If there’s a long summer dry period, the turbine will produce less power, but that’s when the sun picks up the slack.

In fact, the Janowskis have a small heater on the basement wall that automatically runs when the power is too much for the six L-16 batteries that store the fossil-fuel-free power their system generates.  Windmills work this way also, while with solar, you need not keep a steady load as the charge controller just opens the circuit when the batteries are fully charged.

In the powerhouse, Janowski shows Wildfire the lower end of the microhydro system. Water rushes through the pipes into the turbine.
Photo by Vivian Stockman.

In the powerhouse, the arriving water splits into two curving arms and a third, narrower pipe that goes straight — this one is just a diversion for draining the system to avoid freezing and normally is shut off. From the two curving arms, water shoots from both directions at the wheel in the turbine, spinning it to produce electricity. Janowski says having two nozzles increases the power. There are monitors in this house measuring temperature, gallons per minute at the outflow (150 when we were there) and power (it was producing 35.5 amps) The power travels as AC current up to the house.

Janowski says that, at first, he looked at his system every day, but it had been five weeks since he’d last looked at it — it doesn’t need regular attention. However, if the water pressure drops a lot (as in summer dry periods) he needs to tighten the nozzles so as to maintain pressure.

The power system cost about $12,000, not counting burying the pipe, but Janowski said it could have been done less expensively, especially for someone who borrows from the lessons other microhydro installers have learned.

Janowski at the controls. Don’t worry, it is all automated.
Photo by Vivian Stockman.

Thanks again to the Janowskis for showing us their nifty power system and their beautiful house, as well as for serving us an excellent lunch! Their system illustrates the fact that solar panels are not the only feasible way to produce your own power.

Editor’s note: This article will appear in the March edition of OVEC’s Winds of Change quarterly newsletter. in early February, Janowski noted that every day since he installed the microhydro system, more than 100 days, the system has generated more electrical power than his household can use.

Janowski also notes that the cost could be significantly lower for folks who can have their powerhouses closer to their dwellings. Costs savings would come from using less water-transporting pipes and from using DC power. For people who need more details, please e-mail vivian@ohvec.org and she will pass along your questions to Janowksi, who will answer as he can.

Oct 4 2019  Action Alert
Time to Choose to Get Active: Climate, Politics, Solar, with Friends Here and Beyond 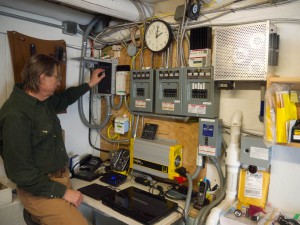