Still denying the reality of climate change? In case you haven’t seen this in the news…according the New York Times, this past January, the U.S. Department of Housing and Urban Development “announced grants totaling $1 billion in 13 states to help communities adapt to climate change, by building stronger levees, dams and drainage systems.”

What was most eye-popping is that a $48 million grant (your tax dollars, folks) was for Isle de Jean Charles, Louisiana “to move an entire community struggling with the impacts of climate change.”

Sadly and little more than ironically, this wasn’t just any community. These residents are members of the Biloxi-Chitimacha-Choctaw tribe. Not only did we force the first people from most of their land during the European invasion, but now our feet-dragging, our denial, our energy-wasting culture is also resulting in displacing another Native American community and worse.

Again from the New York Times: “We’re going to lose all our heritage, all our culture,” lamented Chief Albert Naquin of the Biloxi-Chitimacha-Choctaw, the tribe to which most Isle de Jean Charles residents belong. “It’s all going to be history.”

The article continues: “The Isle de Jean Charles resettlement plan is one of the first programs of its kind in the world, a test of how to respond to climate change in the most dramatic circumstances without tearing communities apart. Under the terms of the federal grant, the island’s residents are to be resettled to drier land and a community that as of now does not exist. All funds have to be spent by 2022.”

This is a sample of an astounding price of inaction by our state and national leaders. As I write this, 40,000 people in southern Louisiana have been evacuated because of massive floods—in some parts of the state 2 feet of rain fell in 48 hours, referred to as a 1,000 year event. And east of Los Angeles, 82,000 (yep, your read that right) people are being evacuated because of a raging wildfire. Enter the Federal Emergency Management Agency (all too familiar in West Virginia where floods have been ravaging parts of our state recently). Who pays for all this? We all do as taxpayers. And who in the meantime, profits? The fossil fuel industry and its paid liars that spew pollution and plant mind-numbing denial, respectively. Don’t these folks have kids and grandkids? Do they somehow think that their wealth will shield them from climate chaos?

Still not convinced climate change is real? Well how about this: A National Geographic story reported this June that the first mammal species went extinct because of climate change. Here’s one of those occasions where it’s not so good to be “first.”

“The Bramble Cay melomys (Melomys rubicola) seems to have disappeared from its home in the eastern Torres Strait of the Great Barrier Reef, the scientists say. The animal was last seen by a fisherman in 2009, but failed attempts to trap any in late 2014 have prompted scientists to say it is likely extinct.”

Also known as the mosaic-tailed rat, this rodent, like the climate refugees above, once lived on an island (also known as cay) off Australia just 10 feet above sea level. “Once lived.” Now those are sobering words.

In 1978, several hundred of the little critters were seen there, but since 1998, because of rising tides (due to human-induced, climate change), 97% of the creature’s habitat has been destroyed. That’s not my personal conclusion, but that’s what was reported by a member of the team of scientists from Queensland’s Department of Environment and Heritage Protection.

I doubt that many in the world took notice of the passing of the Bramble Cay melomys, and some may not see it’s passing as significant. But I mourn, and a part of me shudders. The connection between that little mammal in Australia and the Biloxi-Chitimacha-Choctaw tribe is not lost on me. Right now Mother Nature is sending up flaming red flags.

It’s time to heed Her clarion call. Call or write your Congressman or state legislator. Demand that our state and federal government gets serious about transitioning away from polluting, earth-and-life-destroying fossil fuels to clean, renewable energy. The longer the government stalls, the stakes, just like the encroaching oceans, are getting higher and higher. 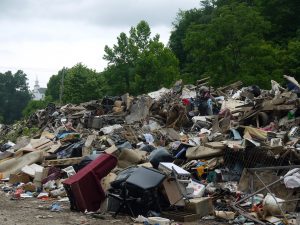