What/Who:
Special screening of the documentary Knock Down the House
present for Q & A will be director Rachel Lears,
and two women featured in the film:
Paula Swearengin, of Coal City, West Virginia
and Amy Vilela of Nevada

Knock Down the House won the 2019 Sundance Festival Favorite Award

Host:
This special screening is hosted by OVEC – the Ohio Valley Environmental Coalition, which is based in Huntington, WV

Why:
Long-time OVEC member Paula Swearengin is one of four women featured in Knock Down the House. Paula had been involved in many of OVEC’s campaigns including the movement to end mountaintop removal, and work to defend our water and curb climate change.

Underlying all these issues and so many more—such as the need to diversify the state’s economy and improve our education system, and the rise of white supremacy, misogyny and homophobia—is the level of corruption in and mistrust of our executive, legislative and judicial branches of government. Our representative government is failing to represent the will of the majority of Americans.

This film shows us that ordinary people can challenge big-money politicians.

Quotes:
“Although the West Virginia legislature recently passed a bill to allow more money into our elections, it’s exciting to see new leaders emerging who are saying no to big-money and rejecting politics as usual. The way forward isn’t with laws like SB 622. The solution is empowering small donors, ensuring equal access to the ballot box, and giving everyday people a greater voice in the political process.” – Julie Archer, coordinator of West Virginia Citizens for Clean Elections, which is based in Charleston, WV.

“This film proves that people-powered campaigns have a positive impact, whether an election is won or lost. No matter the issue we work on, we need fair courts and legislators accountable to we, the people. That’s why we are part of the West Virginia Citizens for Clean Elections coalition, and we are especially excited about the coalition’s Pro-Democracy, Anti-Corruption platform. It’s a roadmap legislators can use to realign themselves with the people they are supposed to represent.” – Vivian Stockman, executive director of OVEC, the Ohio Valley Environmental Coalition, which is based in Huntington, WV.

“We really hope that everyone who sees the film comes away with the sense that their voice matters in the democratic process, whatever their capacity is. Anywhere from voting to feeling called to run for office.” – Knock Down the House Director Rachel Lears to Vanity Fair

Note:
While OVEC can and does encourage people to register and vote, and take part in the democratic process, as a 501-C-3, we neither endorse nor oppose candidates running for public office. 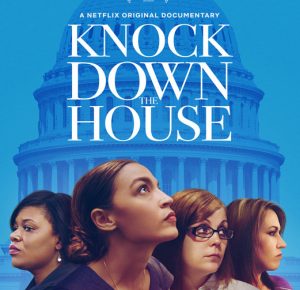