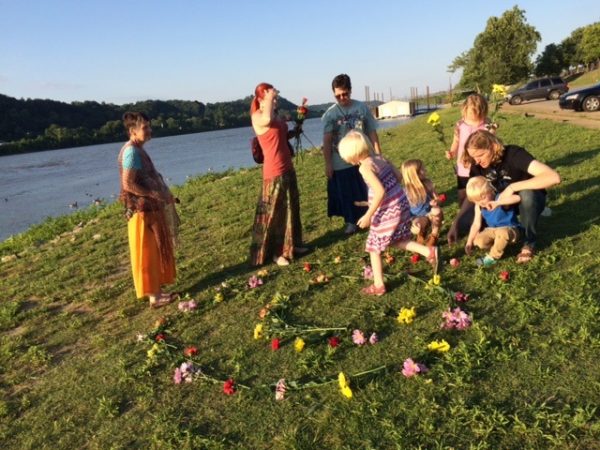 On June 9, members of the Marshall University Native American Organization (MU-NASO) and OVEC gathered on the banks of the Ohio River in Huntington, WV, as part of the Global Earth Exchange, a project of Radical Joy For Hard Times.

The threats to the Ohio River some of which are detailed below) are why we chose to create beauty on the banks of this river, as an act of gratitude for all the river has given us.

Our event had two distinct parts, and nine participants took part in both actions. Prior to sunset, we laid many different flowers in the shape of a spiral on the ground beside the river. We know that without life-giving water, we would not enjoy the beauty of flowers. We chose the spiral to represent our growth and evolution as humans—a symbol of an evolutionary journey that begins with each of us. Children were invited to help us place the flowers since they will be impacted by our future efforts on behalf of the Ohio River.

Once our spiral was completed (though a spiral is never really finished), we sat in a circle around it. Each of us told a story of connection to the river, either from childhood or the present. We talked about why we love the river and about our current concerns. We spoke of how the Ohio River played an important role in our family—whether it was by gaining spiritual or actual sustenance from the river. After everyone had shared, we moved closer to the river for the second event—a Native American Water Ceremony.

Before the Water Ceremony began, elders told each of us what was expected during the ceremony. No negative words or thoughts were to be expressed. Once the ceremony for the Ohio River began, no one was to leave the circle. We would follow the lead of the elders.

To begin, we were purified as Vikki Lee, an elder, smudged each of us with sage. Each of us was given a small amount of ceremonial tobacco in our left hand, to hold throughout the ceremony until we were directed to offer it to the river. Native American drums or rattles were used to accompany each of the four water songs that were offered up to the river; our voices appropriately, were joined by the murmurs, honks, and quacks of Canada geese and mallards.

Other people enjoying the river came closer, watching and listening with curiosity. The sky turned beautiful hues of pink, orchid, and blue as sundown approached. When the singing ended, one by one, we each lifted our hand toward the four directions and then walked toward the river to offer a prayer where we sprinkled the sacred tobacco. To conclude this ceremony, we sang another Native American water song, and then a jar of pure water from a mountain stream was added to the Ohio River, as a hope for its future status.

We lingered and pledged to return, growing our numbers for a monthly Water Ceremony for the Ohio River. Before we left, we hugged and thanked each other, feeling grateful for one another and the river.

Threats to the Ohio River

The Ohio River, which is a water source for more than three million people, is the most polluted river in the United States. Throughout the many years of our country’s industrialization, the river, with headwaters in Pittsburgh, PA, unfortunately has served as a pollution spillway for countless tons industrial waste as well as residential sewage and solid waste. Local, state, and federal officials monitor for only a minute fraction of the chemicals, heavy metals, and other pollutants that are dumped there. When flooding occurs, tons of solid waste and debris from tributaries also pollute this major waterway.

For centuries, residents of the Ohio Valley, including Native Americans, fished these waters. To this day, some people supplement their diets (often of necessity), through fishing in the Ohio River. This is a risky proposition, health-wise. Many portions of the Ohio River are under a state fish advisory, in other words “Do Not Eat.”

Before the Clean Water Act was passed by Congress, the Ohio River, like many rivers and streams throughout the nation, was already in trouble. Chemicals, such as DDT (its dangers highlighted in Rachel Carson’s seminal book Silent Spring), which ended up in the Ohio River via agricultural run-off, harmed aquatic and other wildlife that inhabited or depended on the river for sustenance, all a part of the web of life. Birds, such as the osprey, which only eats fish, disappeared entirely for several decades. When the osprey consumed fish from the Ohio River, chemicals, which compromised their reproductive systems, caused thinning of eggshells. Their eggs, no longer viable, would break when the female would sit on them.

In the late 1980s and early 1990s, after DDT was banned in our nation, the osprey made a comeback.

In addition to current pollution, new threats are looming; states along the Ohio River, including West Virginia, Pennsylvania, and Ohio, are under assault from the oil and gas industry. Water quality and aquatic life are now endangered by deep-shale gas hydraulic fracturing (or fracking) adjacent to the Ohio, natural gas storage, new petrochemical plants, solid fracking waste disposal, liquid fracking waste injection—all of which have the potential to pollute the river. Our local, state, and national elected officials’ approval of fracking poses an enormous risk to our water sources. 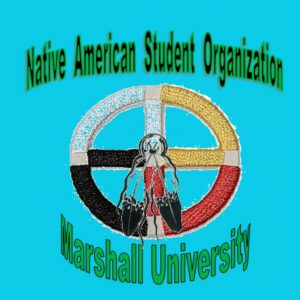