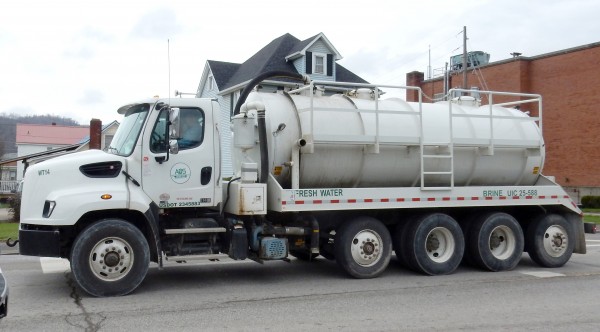 Sometimes the ironic timing of the daily news demands a blog post. This is one of those times.

On Monday, November 17, a Charleston Gazette story informed us that a “small plant” near Fairmont is recycling the waste water produced by gas fracking. This water contains a mixture of fracking compound fluids, (the exact contents of which is not usually disclosed to the general public, nor to first responders), “brine” mixture from deep within the earth’s ancient geological structures, and possibly some radioactive material which we know is inherent in the Marcellus and other shale fields.

The article focuses on the fact that the small water recycling company’s biggest customer, Antero Resources, has applied for permits to build their own water “recycling” facility in Doddridge County — the site of which looms precariously over an economically challenged small community. What caught our attention, however, was the list of uses possible for the “recycled water.” The brine — or salinized solids and water — is bound for a roadway near you this winter or for certain processes on a frack well pad that need that kind of water.

A spokesperson for the recycling plant said this about the water that is distilled from the “brine”: “For the most part, we’re putting that in the river.”

Okay, that raises some eyebrows, but there is also this, noted about the fluid and solids extracted: “the slurry goes into a centrifuge where the salt is drawn and transported on a conveyor belt into the storage shed. The distilled water goes out into the river or into a 1.6 million gallon impoundment where it can be re-used for fracking or donated to fire departments for firefighting.”

Hold on a minute, here… firefighting? Really? One wonders if this is a good idea given that the fluid could still contain significant quantities of flammable and/or toxic chemicals. So, we asked Dr. Randi Pokladnik, a PhD level chemist, what she thought, and got this response:

“… no way they should spray that on a fire, if for no other reason the possible reaction of water soluble substances and the radiation… then of course the exposure for firefighters.”

Dr. Pokladnik and others also have raised issues related to the air emissions of this kind of water recycling facility, including the diesel emissions of the multitude of trucks that will be necessary to deliver and haul away frack water and the components that are distilled during the “recycling” process.

In the midst of wondering whether we have lost our collective minds in this state and region, another article surfaced in our news feeds. This article described what happens when fracking chemicals catch fire.

The fire, near Pittsburgh, was said to have forced 70 residents from nearby homes and injured four people. including three employees of the plant and one firefighter who inhaled toxic fumes. None of these injuries were deemed life threatening, but one wonders about future health problems that exposed individuals may suffer. See what happens with a fire like this in the photo in this article: Seventy (70) Homes Evacuated in Fracking Chemical Fire at Leetsdale, PA.

So, you be the judge: is it safe to “recycle” fracking waste water for the “brine” that can be used to remove snow and ice on our roadways and for uses like firefighting? Do you think that water distilled in these processes should be returned directly to our streams and rivers? Even if there are fairly benign uses for the distilled water (such as reducing the water withdrawals from our streams and rivers for fracking), is it worth the risk to have such “recycling” facilities near low income communities? Do you think first responders should be unknowingly exposed to the chemicals and/or radioactivity that could be present in this kind of “distilled” water? Would you want this kind of plant in your backyard, or upstream from your water system?

If the answer to any of these questions is a resounding “No!,” then we encourage you to write letters to the editor and submit them to your local news service. For some information on how to do that and helpful links to media outlets in our area, see our tips here.