After Years of State Failure to Protect Critical Waters, Citizens Step Up Actions to Require EPA to Enforce Clean Water Protections in West Virginia and Kentucky

WASHINGTON, D.C. – National and local groups representing Appalachian citizens announced Wednesday that they will push the U.S. Environmental Protection Agency in federal court to weigh in on the documented, systematic failure of Kentucky and West Virginia to regulate harmful water pollution from mountaintop removal coal mines.

Wednesday’s separate legal actions come five years after groups first filed formal petitions with the EPA regarding West Virginia and nearly five years after the first petition regarding Kentucky. Those petitions implored the agency to revoke the authority of Kentucky and West Virginia to implement the Clean Water Act in their states, so that EPA could take over in their stead.

Bowing to pressure from the coal industry, the West Virginia and Kentucky clean water programs have failed to prevent the widespread contamination of state waters by coal mines. Citizens in the region have looked to the EPA to step in and protect them from mountaintop removal mining pollution.

The latest legal actions from citizen groups seek to require EPA to respond to such petitions, which it has yet to do since the first petition was filed in June 2009. The Agency has also not responded to a notification of the groups’ intention to hold it accountable, which was submitted sixty days ago.

The serious and continuing danger to citizens in Appalachia was highlighted even further by a third action filed today. In that action, citizen groups announced their intention to hold EPA accountable for the fact that it has signed off on West Virginia’s policy of failing to protect streams and aquatic life harmed by mining pollution—even while it regulates all other forms of stream pollution.

“Communities in Appalachia have been living with mountaintop removal pollution for too long.  EPA needs to step up and seize the opportunity to protect Appalachian residents from rampant water pollution,” said Bill Price, a native West Virginian and national organizer for the Sierra Club who lives in Charleston. “We’ve shown the federal government that Kentucky and West Virginia are refusing to hold mining companies accountable for dangerous pollution—and EPA must take action. The Agency should immediately revoke the authority of those states to implement the Clean Water Act, or, even better, if EPA thinks change is possible it can start working with the states tomorrow to make sure they finally get serious on their own.”

“As early as five years ago, our petitions demonstrated the failure of state regulators to protect our communities from dangerous mining pollution—and the evidence and further destruction has only piled up since. Uncontrolled pollution from mountaintop removal mining is harming communities by killing off Appalachia’s steams, our wildlife, and our heritage.” said Cindy Rank of the West Virginia Highlands Conservancy.

“We also have to acknowledge that many state and federal politicians have apparently influenced the environmental agencies, making it difficult to impossible for them to enforce water protection laws at mountaintop removal mines. It is a horrible commentary on our national political situation that damaged human health and contaminated water have been acceptable sacrifices in the quest to make mountaintop removal mines profitable” said Dianne Bady of the Ohio Valley Environmental Coalition.

“There is no excuse for EPA not taking action long before now to safeguard our communities,” said Mary Love from Kentuckians For The Commonwealth. “Since we filed our original petition, the Beshear administration has admitted publicly several times that Kentucky does not have the capacity to enforce the Clean Water Act. In fact, the governor has proposed and the legislature has repeatedly cut the budget for the enforcement of environmental laws, making it impossible for the state to enforce the law.  We see the consequences of these failures as people continue to get sick, our streams get more polluted and companies like Frasure Creek Mining blatantly flout the law. The people and communities of Kentucky and West Virginia deserve better than the legacy left us by uncontrolled, runaway coal mining: a broken economy and a polluted environment.” 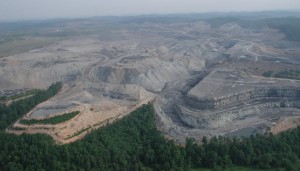