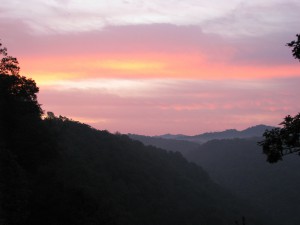 Right before the holiday break in December, I happily attended the Alliance for Appalachia’s Summit on Economic Transition. I went as an OVEC representative, along with OVEC’s founder Dianne Bady.

As someone who helped plan the event, I was ecstatic about the standing-room-only attendance. The full-capacity turn-out reflects current interest in economic transition, a topic getting a lot of attention due to the declining coal economy in Appalachia and growing realization that we need a more sustainable and equitable economy — an economy that creates and leaves wealth in communities, instead of whisking wealth away and leaving only negative health and environmental impacts.

Leading up to the summit, the Alliance for Appalachia conducted a listening project among its member groups, as well as other Appalachian organizations, labor unions and federal agencies. The listening project explored the potential for regional-level collaboration on work toward the goal of achieving environmental and economic justice in Appalachia.

Ideas discussed at summit included concrete projects in which people can engage in right away, include:

So, there is much to be done as we move forward and decide what our region’s economic transition looks like and how we can accomplish that transition. I will keep our loyal OVEC members informed on how you can help to create economic transition in Appalachia for a better, more equitable, sustainable and inclusive economy that works for West Virginia instead of against it. Feel free to contact me at dan@ohvec.org or 304-522-0246 if you’d like to get more involved in these efforts.