The Reindeer Chronicles is a book to read after you have engaged in self-care. It places your environmental concerns in a perspective that lets you lessen stress about ecological degradation, as discussed in the book A Field Guide to Climate Anxiety by Sarah Jacquette Ray. After all, there is just so much we can personally do to help eliminate the oppressive and destructive carbon content in the atmosphere… although voting for those who will pass regulatory laws is essential.

Schwartz’s book is different in that its focus is on what you can do—what people all over the world, from Texas to Zimbabwe are doing right now—to restore the earth’s barren and wasted landscapes.

If you are lucky enough to have a garden or live in a space that can contain a garden, then you hold an important key. A simple garden can go a long way to reinvigorating soil, supporting living creatures, and providing sustenance. If there were enough gardeners, then the world would be a much more vital place!

Schwartz’s book is a journey to several places where individuals and organized grassroots groups are making changes to restore the earth’s wastelands, including the Loess Plateau in China, which has been transformed from an eroded mountainside to a terraced farmland. The book also visits Andalusian Spain, where groups are countering desertification through agriculture and water management. Also featured is the re-valuation of the dingo, camel and donkey, from being seen as pesky to being Australia’s helpmeets in re-fertilization of its landscape.

Relevant to the fires currently raging in the Western U.S., Schwartz’s work provides a way to reduce wildfires through grazing: using the forest for grazing keeps ground cover low and can prevent fires from spreading. However, approximately 98% of fires are caused by humans, and building human habitation through the forests will probably not stop fires from consuming them or the human developments that encroach upon them.

The Reindeer Chronicles is also a call for increased recognition and respect for indigenous peoples throughout the world: the Sami in Norway who are fighting to keep their reindeer herds intact, to keep their traditional way of life intact, despite the Norwegian government’s attempts to cull them to make more room for oil and gas and mineral extraction; and the Aina in Hawai’i, who are attempting to reclaim their right to lands and waterways appropriated by colonialists for large and destructive sugar plantations. Native Hawaiians have been engaged for years to protect Mauna Lea on the Big Island from the construction of the largest telescope in the world. There are 13 telescopes already there, and each appropriation is seen as another assault to a mountain that is sacred to them.

An integral point to be made when trying to resolve conflicts detailed in the book is the use of consensus. Schwartz emphasizes consensus, where everyone chooses to agree on a solution, over compromise, which is seen as having inherent winners and losers. Consensus was used successfully among feuding Texan ranchers in deciding how to use the landscape for grazing and a river tributary of the Rio Grande. It took time, but that fact that the ranchers agreed to come together in the first place was seen as a successful first step. Consensus acknowledges each person’s humanity, feelings, concerns, and wishes. It builds and relies upon trust.

An essential question for discussing every ecological problem facing the planet is this: Even if making things “best” is impossible, what can we do now to start making things better? Everyone can play a part in making a start.

Women are integral in making a start: they play an important part in the process of regenerating the earth. In the U.S., some 40% of women are sole and cooperative owners of farms, and they are farmers. Worldwide, the figure is twice that, even though many women in developing countries do not get paid for their work. The movement to educate and involve more women (and men) in farm work is called “Glamping,” camping out on the land as a way to learn about nature and how to restore it.

If all it takes to make the earth a better place is one person tending a garden, then think of how exciting it is when groups of people gather with the same purpose! After reading this book, you will have a better idea of how to proceed. The organizations Schwartz acknowledges throughout the book are doing just that, and they all have something to offer for anyone who wants to make the world work for everyone, not just those who wish to exploit it for greed and the thin deity called the Gross Domestic Product. 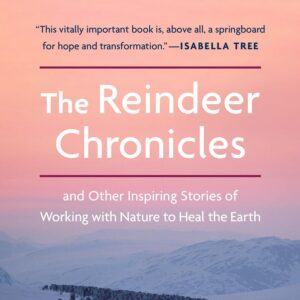