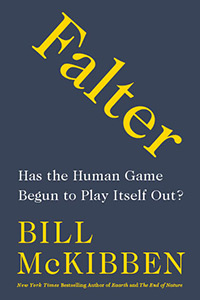 If the billions of years of earth’s existence were scaled to a 24 hour day, human civilization would have begin about 1/5 of a second ago. A mere zip in time…for us to have influenced life (and death) on earth as much as we have. Not all of our influence has been good; we are being overwhelmed by the bad.

Bill McKibben, an environmentalist and one of the founders of 350.org—350ppm of carbon being the comfortable maximum level of atmospheric carbon the Earth can tolerate without catastrophe (we are presently over 400ppm)—tells us why in his newest of fifteen books, Falter.

What is a “ppm”? Ppm stands for “parts per million,” in this case, of carbon dioxide, the heat equivalent of 400,000 Hiroshima bombs exploding every day, putting 40 billion tons of carbon dioxide in the atmosphere each year. Feel the heat?

McKibben considers our time on earth as a human game, the sum total of culture, commerce, politics, religion, sport, social life…of everything that makes the human experience. His book is a response to the question of whether we are faltering in the way we are playing this game — the way we currently choose to play it. Perhaps, in playing this game without rules that govern its continuance, we are faltering and shortening our game-time. He notes that humans have used more energy/resources in the last 35 years than in all of human history.

Some pieces of this game are destroying our game board: fossil fuels, primarily, while other pieces will help to mitigate this destruction: primarily solar energy, wind, and the sea. We have been playing our current game intensely since the invention of the steam engine and the coal that powered it, and more recently through rampant oil drilling and gas fracking. These extractive sources of energy are causing the dramatic climate changes which most humans have experienced, and which the poorest among us have no chance of avoiding. Climate change costs the US $240 billion per year. Future mitigation could cost the world $535 trillion. A drop in the bucket? It may be the bucket itself!

The name of this human game might be called “Acceleration.” We are playing it faster than ever, without regard for its implications, despite the obstacles of drought, flood, famine, fire which will cause this game to end, if not abruptly, then sooner than we might like. This is unfortunate: the human game can be a game without end if we play it right. We are the only species that canchoose not to do things that we know are not right for winning, yet so far we have chosen to ignore this and play on as if climate chaos does not matter. Not all of us, but corporations and individuals who benefit from climate pollution have done and are doing much to ignore, deny, ridicule and overcome the very regulations that may save us from ourselves.

Why do we continue to do what will destroy our human game? The reasons for this are simple, yet complex: money and power are simple to understand. Denying simple justice is easy to do when the greedful rewards are vast. For example, the three richest people in the US have more collective wealth than the bottom 150 million rest of us. Think about it: Amazon’s Jeff Bezos would have to spend $28,000 every day to keep his wealth from growing. It is lucky that his wealth is not directly dependent on the extractive fuel industry.

Yet, making change after some two hundred years of accelerating growth based on fossil fuel extraction is complex; it means TOTALLY re-thinking the rules governing how we live. We have been fairly comfortable playing the game in this way, even though environmental science concerns have been raised at least sixty years ago when Edward Teller predicted ice cap melt and sea rise, and in earnest some thirty or so years ago. And, they continue to be raised almost daily with increasing alarm.

McKibben names the key game players as those persons and corporations, immensely rich and powerful, who have made and continue to make their wealth from playing the game their way without regard for any losses other players might suffer. Specifically and frequently, he calls out the Koch brothers and Exxon. Extractive players. If electric automobiles fail to garner a hold on our economy, the Koch brothers will be held responsible. Theirs is a world in which greed is good, in which Ayn Rand’s,Atlas simply Shrugs off the human costs of wealth at all cost, and government is bad if it interferes with untrammeled wealth creation.

Who suffers most from this world view? All of us, of course—but black people are 52 percent more likely than white people to live in areas of “unnatural heat risk-related land cover.”

However, there are other, lesser players, the most currently infamous of whom is the Chinese researcher He Jiankui. Jiankui took genetic research out of the realm of simple cloning and finding ways to combat disease, altering the genes of twins in utero so they might be born with the ability to thwart HIV. One twin may have achieved this alteration successfully, but the other may have been damaged in the process (the Chinese level of transparency is questionable).

The Chinese view this experiment as “extremely abominable,” and He may have been arrested as the result. We do not know at this time. However “abominable,’ He’s experiment has weakened any proscription against gene alteration, and the endeavor by which this was done, named CRISPR (Clustered Regularly Interspaced Short Palindromic Repeats) has extended its use from a cautiously laudable power to fix existing humans with existing problems, to the alteration of future humans, that is, replacing chance with design. Is choosing your baby as you would choose an article of clothing a good thing? Prevailing rules of the game say no. Of course, we attempt to alter the behavior of offspring through reward and punishment, nutrition, school, cultural value systems, etc. Yet, the power of genetic alteration to direct the evolution of species presents an irrevocable threat to the human game. A red flag waves.

Another player, another flag waved by McKibben, is that of Artificial Intelligence (AI), whose most far-reaching proponents dream about creating robots that will do everything for us, allowing us to live a life of leisure and the pursuit of interest and pleasure. How might we be faltering here? Simply by ceding the meaning of life to machines, of losing the trance-like joy of being so happily immersed in some intrinsically motivating activity that time flows away without our being aware of it.

What to do? We can stop supporting extractive industries by consuming much less, by voting more for legislation exactly like that which is being shredded by the Trump administration. One tenth of one percent (24,949 people) provided 40 percent of campaign contributions for the 2016 election supporting those most against climate change regulation. It is estimated that 150 million lives could be saved if the Paris Accord goals are met, twice those who died in WWII.

Protest with your body and your vote any decision made to thwart the transition to renewables: a Stanford study suggests that nearly all countries on earth could be 80 percent renewable and energy efficient by 2030 if there was the will—the technology exists now. Invest in solar panels.

Think wind. Support divestment by institutions and corporations in extractive industries—nearly $8 trillion has been reclaimed by divestment so far.

I expect that readers of this review are already involved in re-setting the game rules. The key is in getting others to do the same. 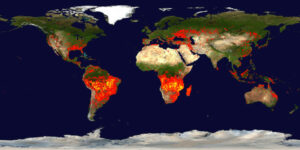