The cancellation comes at Powhatan Salt Company’s request and reflects the demands that a coalition of clean water advocates outlined in a lawsuit against ODNR over the permits. Represented by Earthjustice, Buckeye Environmental Network, Concerned Ohio River Residents, Freshwater Accountability Project, Ohio Valley Environmental Coalition and the Sierra Club sued ODNR last month for issuing these permits without public notice or comment or preparing a draft permit, in violation with their own regulations for solution mining projects.

“This is a huge win for the autonomy of the Ohio River Valley’s people. We cannot allow companies to walk into our community and store highly explosive and toxic chemicals under our river, our drinking water, without the bare minimum of public comment,” said Alex Cole of the Ohio Valley Environmental Coalition.

“This is a resounding victory for clean water advocates. The public deserves to have a voice, especially on projects that could have a disastrous impact on their health and water quality,” said Megan Hunter, Earthjustice staff attorney.

“We are happy to see the permits for these wells cancelled. The site location for Mountaineer is very problematic. It is located on the banks of the Ohio River, threatening the drinking water of five million people. The proposed site is in close proximity to coal mines, fracking wells, pipelines, and is less than a mile away from Clarington and the communities drinking water wells,” said Jill Antares Hunkler, member of Concerned Ohio River Residents.

Shelly Corbin, Ohio Campaign Representative for the Sierra Club’s Beyond Dirty Fuels Campaign said, “This unnecessary fracked gas facility shouldn’t have been proposed in the first place, but we’re glad to see that the people most impacted by it will have their chance to weigh in. The scheme to store dangerous ethane underground is one of the fracking industry’s last ditch efforts to save itself. We shouldn’t be building projects that pollute the air we breathe and the water we drink.”

Teresa Mills, Buckeye Environmental Network, claims this as a victory. “We will continue to watchdog not only the industry but also any and all agencies that are supposed to regulate the industry and fail to do so,” she said. 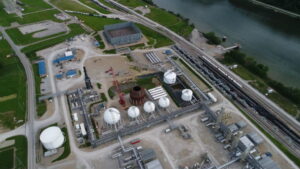 Jun 9 2021  Hoots and Hollers
Chemical Plants and Protecting Your Community: Speak Up to EPA

May 25 2021  Hoots and Hollers
Fertility on the Brink
Hoots & Hollers, the OVEC Blog © 2014 Frontier Theme
Send this to a friend