While climate change continues to cause detriment in West Virginia and around the globe, the United Nations has taken action to slow the damage caused by this phenomenon. In an effort to mitigate the effects of climate change, the Paris Climate Agreement, an international treaty, was adopted in 2015. Under the Paris Climate Agreement, the world committed to staying “well below” 2 degrees Celsius of warming by the end of the century. To achieve this goal, countries around the world are working to reduce greenhouse gas emissions. While the United States officially withdrew from the Paris Agreement last year, many are pushing for a re-entrance. 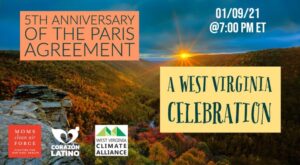 Sep 16 2021  Action Alert
Speak with DEP and Coming Up: Speak Out, Listen, Learn
Hoots & Hollers, the OVEC Blog © 2014 Frontier Theme
Send this to a friend