Submit calendar items for potential posting on this page to info@ohvec.org.

In Huntington, the Huntington-Cabell branch of the NAACP and the Department of Intercultural Affairs at Marshall University are sponsoring the annual memorial march and events to follow in celebration of Martin Luther King Jr.’s birthday Jan. 20.

The march will form at 4 p.m. at 16th Street Baptist Church, Elm Street and 9th Avenue, and will begin at 4:30 p.m. It will end at the Joan C. Edwards Performing Arts Center, followed by a program and reception.

The lecture, “One Woman, One Vote: The Long Road to Ratification of the 19th Amendment,” will be at 7 p.m. Tuesday, Jan. 21, in Brad D. Smith Foundation Hall and will kick off several activities that Marshall has planned as part of its commemoration of the Nineteenth Amendment’s centennial celebration.

The event is free and open to the public.

Spruill will discuss how, after decades of struggle, the woman suffrage movement – an offshoot of the antislavery movement — made progress persuading states to enfranchise women. She will explore how full enfranchisement ultimately depended on securing an amendment to the U.S. Constitution, a deliberately difficult process that involved approval of two-thirds of each house of Congress and three-fourths of the states.

According to Spruill, amendments regarded as radical or unpopular in any part of the nation were all but destined to fail, making the story of how women won the vote in the United States a long and complicated one involving hard work, ingenuity and sheer perseverance to overcome racial, regional and generational tensions. Her discussion shines a light on a small group of women considered to be radicals who managed to gain the strong, widespread support necessary to overcome the obstacles deliberately placed in the amendment’s path.

“I am proud that Marjorie Spruill is participating in the lecture series and excited to welcome her to Huntington,” said Patricia Proctor, director of the Simon Perry Center for Constitutional Democracy, which sponsors the Amicus Curiae Lecture Series. “I first learned of her when I studied her work in college. She is a recognized authority on this inspiring part of our nation’s history. I am looking forward to a dynamic and entertaining presentation that will give perspective to those focusing on this issue for the first time and will enrich the knowledge of those already interested.”

Marshall has several other activities planned to recognize the 100th anniversary of the passing of the 19th Amendment, including lectures, a special topics history class, a Women’s Suffrage March on Women’s Equality Day, a voter registration campaign and much more.

Justin Nobel, Science Journalist writing for the Rolling Stone Magazine will hold an informational meeting regarding the radioactive risks associated with the oil and gas industry at Ohio University Eastern in Belmont County, Ohio.

Justin has spent the past 20 months reporting on the issue of the radioactivity brought to the surface in oil and gas production, and the many different pathways of contamination posed to the industry’s workers, the public and communities, and the environment.

Justin’s story is due out in the February issue of Rolling Stone magazine, and he is also writing a book on the topic to be published with Simon & Schuster and tentatively titled: “Petroleum-238: Big Oil’s Dangerous Secret and the Grassroots Fight to Stop It.

This is important information, and it is information all should hear. We ask that concerned residents, industry workers and their families, policy makers and anyone else in the community please feel free to attend. Also present will be Dr. Julie Weatherington-Rice, an environmental scientist who has been studying oil and gas waste for over 40 years. 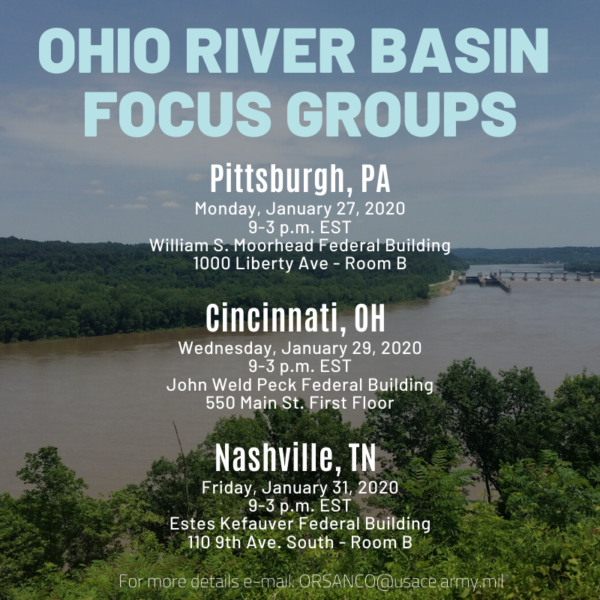 From the USACE: The Ohio River Basin Study is the biggest basin-wide study being conducted across the basin in many years. The study, being completed by the U.S. Army Corps of Engineers in partnership with ORSANCO (Ohio River Valley Water Sanitation Commission), will provide clear strategies and an action plan to advance six primary goals for water resources in the entire Ohio River Basin. These focus groups will look at refining existing strategies for the basin with a focus on the Knowledge and Informed Decisions goal.

Please plan to attend this year’s E-Day at the State Capitol on Tuesday, January 28 from 9:00 – 2:00 p.m. Join environmental groups from across the state in the upper rotunda to lobby our delegates and senators on the importance of protecting the air we breathe and the water we drink.

Afterwards, we will gather at the Empty Glass for our annual GREEN Jam. 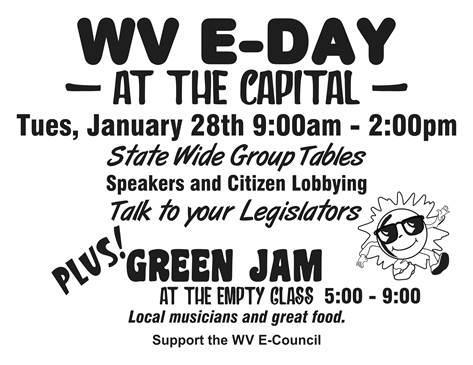 Feb 1, 2020 12:00 pm – 3:00 pm
This is a national issue…
March with the Climate Crisis Coalition to the Iowa Events Center to rally the global news media to do a better job covering CLIMATE!

Join more than 50 groups – as an individual, family, or organization – to rally the media to cover the cause of so many urgent issues of the 2020 election: CLIMATE!

Des Moines swarms with media every four years during the days leading up to the caucuses. In order to act on the opportunity of national and international coverage, we are hosting a Climate Crisis Parade.

Meet at Cowles Commons to hear influential climate activists make the climate connections the media has been ignoring.

Then we will march through the streets or skywalks (weather dependent) to the Iowa Events Center, with our Iowa Caucus message: “We Challenge YOU …!” – urging the media to do a better job covering climate.

Please note that, because we’re working for the good of the planet and all its inhabitants, we will not welcome those with offensive or violent messages. We also will not include or welcome partisan messaging of any type.

Co-Sponsors: Connect with us to become a co-sponsor! We invite participants to serve on the steering committee, co-host the event, be in the parade, and mobilize supporters and members to attend.

From Beyond Extreme Energy

The climate crisis is deepening, frontline communities continue to be victimized by the fossil fuel industry, and Trump’s FERC (Federal Energy Regulatory Commission) is going from bad to worse. It’s time to take action at the FERC headquarters in Washington, D.C. to call for its replacement by FREC, a Federal Renewable Energy Commission!

This call for FERC Into FREC is supported by 220 local, state, regional and national organizations and presidential candidates Bernie Sanders and Elizabeth Warren and the Green Party’s Howie Hawkins and Ira Schlakman.

February 20th is the next monthly meeting of the FERC commissioners. In December, by a 2-1 vote, they decided that new, non-fossil fuel sources of energy that receive state subsidies, like the sun and wind, would be penalized and forced to pay more to access the PJM electrical grid that serves 13 states and DC.

—They continue their decades-long policy of rubber-stamp approvals for every gas industry expansion permit.

—The odds are high that they will support Trump’s just-announced proposal to weaken currently required environmental and climate reviews via the National Environmental Policy Act (NEPA).

For more than five years Beyond Extreme Energy and other groups have been taking action at FERC, shining a spotlight on its corrupt ties to the fossil fuel industry. It’s time for nonviolent escalation! On February 20th, let’s attend their public meeting and make clear that it’s time for big changes at FERC—it’s time for a Federal Renewable Energy Commission, FREC, to replace it!

For more information, to endorse and to sign up please go here. If you are with an endorsing organization and want to take part in the planning for the Feb. 20th action, be sure to let us know.

Note: There is an important Supreme Court hearing on February 24th in D.C. on the Atlantic Coast Pipeline. What they decide is important to all pipeline battles. Groups fighting the ACP are mobilizing for a press conference and action outside the Supreme Court that morning. We strongly support this action and urge people to participate.

All in is on the line!  Be counted! 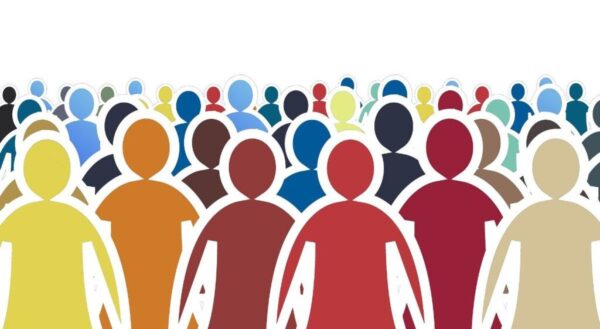 $800 Billion
The amount of money Congress distributes annually to communities based on census data.

Information gathered by the census helps determine funding, representation, and allocation of infrastructure and public services for our state and our communities.

Results of the U.S. 2020 Census will influence individuals, communities, governments, for-profit entities, and nonprofit organizations throughout the next decade.

Data obtained will inform decision makers in all sectors and lead to allocation of political power and financial resources.

If the data are wrong, there will be inequitable distribution of resources for basic community needs, such as education, food and income security, health care, housing, transportation, and much more.

The allocation of $1.5 trillion in federal funds hinges annually on the decennial data, including funding for state and local governments, as well as for nonprofits to deliver services to individuals and communities.

Stand up and be counted!

It’s looking like OVEC’s next Treehuggers’ Ball will be April 4!

5 WAYS YOU CAN TACKLE PLASTIC POLLUTION 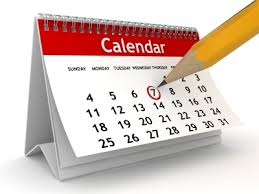