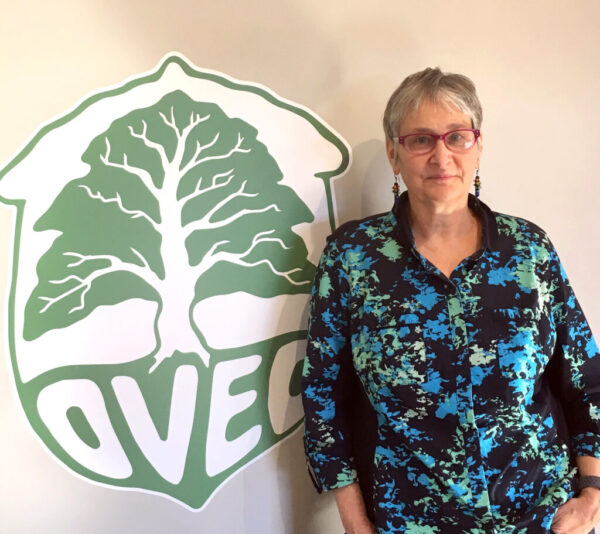 Vivian needs help with proofreading and editing, and with writing newsletter articles. We always need folks to write letters to the editor and opinion pieces, to comment online, to develop YouTube videos, edit photos and help with other visual work.

Take one of OVEC’s media trainings and then step forward to be a spokesperson for your community. Your stories about mountaintop removal and other environmental problems are vital, and the media is essential to getting your story out. Contact Vivian for details.

Awards Vivian has received for her work on environmental issues include:

She is frequently in the field with writers, photographers and filmmakers. OVEC makes media outreach a priority, from local to international news outlets. We connect journalists with our members in their home communities. When media outlets carry news and photos about our members and our issues, we reach potential new members (building our base of power). We inform a broad audience and stir people to action. Hundreds of stories covering the work of our members, volunteers, staff and board appear in the media each year.

Vivian offers media training for our members, covering skills such as crafting a message, writing letters to the editors and practicing on-camera interviews. If you would like media training in your community, contact Vivian or one of OVEC’s organizers.

Vivian also edits our newsletter, the Winds of Change. Each day, she collects and posts onto the OVEC website news relevant to our work. She also develops content for the website and is responsible for sending out Action Alerts whenever important events are happening.

Vivian’s photos of mountaintop removal and the movement to stop this extreme coal-mining practice have been published in newspapers, magazines, books, and documentaries and on websites. Publications credits include the New York Times, the Washington Monthly, Orion Magazine, World Watch Magazine, E Magazine, French Geo and dozens more.

Her essays about mountaintop removal and coal sludge impoundments have been  published in the large format Plundering Appalachia (which features dozens of Vivian’s shots, including the cover shot) and in The Appalachians, a companion book to a PBS TV series by the same name.  Her op-eds have appeared in assorted West Virginia newspapers and on websites.  She has assisted with, consulted for and been filmed for several documentaries including Time to Choose, The Last Mountain, Burning the Future, Goodbye Gauley Mountain and others.

On May 9, 2017, Vivian Stockman appeared live on C SPAN’s “Washington Journal” for a program on coal. Several years ago she appeared on a WV TV show, “Decision Makers,” opposite Don Blankenship, then CEO of Massey Energy. See part 1 here part 2 here. She has almost recovered.

Vivian’s work with OVEC include the occasional foray into street theater as “King Coal.” We don’t know if the two are related, but Vivian is a recipient of the West Virginia Environmental Council’s “Mother Jones” award—its top award.

Before coming to work for OVEC, she worked for the West Virginia Highlands Conservancy on their Save the Blackwater Canyon campaign.