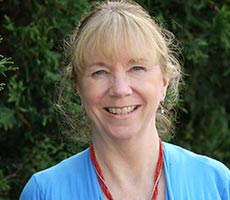 Janet Keating, OVEC’s Director Emeritus: In September, 2016, after 24 years with the organization, nine of them as executive director of OVEC, Janet Keating retired.

Besides keeping OVEC in tip-top shape, over the years, Janet also served on steering committees for The Alliance for Appalachia, The CLEAN (Citizens Leading for Energy Action Now) and Christians for the Mountains. She served on the Government Concerns Committee of the West Virginia Council of Churches.

It is my honor, having worked the past 15 years with our recipient, to be able to present the Thomas A. Knight Excalibur Award to Janet Keating, executive director of the Ohio Valley Environmental Coalition.

Unfortunately, I didn’t have the pleasure of knowing Tom, but I understand from those who did that he shared many qualities with Janet. Tom was a reporter, a legislator, and a labor lobbyist. But he was also more than that. Like Janet, Tom was an agitator and a fighter for social justice.

Janet’s accomplishments are too numerous to mention here, but one notable connection between Tom and Janet is that Tom was public relations consultant for the Affiliated Construction Trades Foundation, when organized labor and environmental allies including OVEC were fighting to keep what would have been the country’s largest chlorine-based pulp mill out of West Virginia. Tom coined the phrase “Cancer Creek” because of the mill’s huge dioxin discharge. Janet led OVEC’s organizing and coalition building efforts against the mill, and its ultimate defeat is just one of many battles OVEC has fought and won during Janet’s 24 years with the organization.

I doubt Janet needs much more of an introduction, but for those of you who may not know her, she is a biologist and former educator, who has spent a lifetime as an activist, organizer, and defender of the environment. She’s also a proud mom and ecstatic to be a new grandmother. Before joining OVEC in 1992, Janet, an avid birder, began her career as a volunteer in 1983 with a campaign to protect a threatened wetlands area just north of her hometown of Huntington. She organized and co-founded the Greenbottom Society, which is still in existence today.

Janet also organized and led our Clean Elections coalition in WV for 10 years, which is how I came to know, work with, and become friends with her. The coalition has gone on to have some important legislative wins in terms of requiring disclosure by entities that fund political campaigns and, most notably, efforts to curb special interest influence in the courtroom by establishing a public campaign financing program for candidates for our state Supreme Court.

It speaks volumes of Janet that she has already been recognized many times for her work and accomplishments. In 2001, Janet was part of the OVEC leadership team that received the Ford Foundation’s Leadership for a Changing World award for outstanding grassroots leadership in improving people’s lives. In 2004, Janet received the WV Environmental Council’s highest award, the Mother Jones Award, given to one, who like Mother Jones, fights like hell for the living. In 2011, Janet received the Human Rights Recognition Award from the Greater Church Women United, a national award that recognizes the commitment and contributions of women at the local level who have demonstrated dedication to the struggle for human rights. In 2015, Janet was chosen as one of the Environmental Working Group’s Women of Courage for her fearlessness and tenacity in fighting to protect her community from environmental threats big and small.

Most recently, under Janet’s leadership, OVEC received the Jean and Leslie Douglas Pearl Award, which recognizes recipients’ commitment and dedication to positive change and promoting the rights of individuals to live in a world with clean water, clean air, and sustainable land.

Although Janet will be retiring later this year, she will continue to be an inspiration and a source of strength and wisdom to those she has worked with, mentored, and become friends with throughout her many years of organizing and advocacy.

For her leadership and lifetime commitment to protecting the environment and working to improve the quality of life for all West Virginians, please join me in welcoming one of my personal heroes, my friend, and this year’s Thomas A. Knight Excalibur Award recipient, Janet Keating.