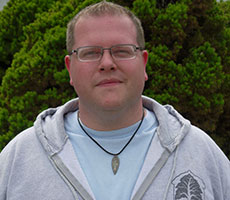 Dustin is an 11th generation Appalachian native raised in Boone County, one of the top coal producing counties in Southern West Virginia. Once an avid coal supporter, he became aware of its destructive practices when Patriot Coal Company began blowing up a mountain named for his ancestors, Cook Mountain, and threatening his 200-year-old family cemetery. After witnessing increased flooding, entire communities uprooted and erased, and an ever-escalating rate of poverty and health issues throughout the coal producing region of Appalachia, he became a volunteer with OVEC, and one of our most eloquent and effective speakers.

In 2010, he helped lobby in the West Virginia State Legislature for successful passage of stronger cemetery protection legislation and was featured in the March 2012 issue of Sierra Magazine for this work. He aided his family in getting WV Route 26 named as a Civil War Veterans Memorial Highway in honor of his 7th great-grandfather and Union Soldier, William Chapman Cook, whose grave was threatened by mountaintop removal. Dustin was awarded the Super Citizen Lobbyist Award from OVEC in 2011. He has traveled across the U.S., as far as Maine and California, speaking on panel discussions and giving presentations on the effects of mountaintop removal on Appalachian communities.